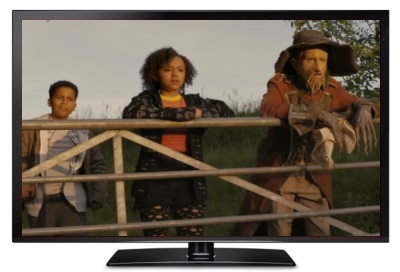 Mackenzie Crook is a comedy genius, and I only say that about seven and a half people. The man behind the shockingly gentle but incredibly lovely BBC4 sitcom Detectorists, for three series and a Christmas special it was consistently filled with sweet and tender humour, and examples of the best of humanity as these kind and warmhearted individuals searched for gold, though for the viewers their friendships was the real treasure.

Now he’s back with a new series, an adaptation of the Worzel Gummidge books by Barbara Euphan Todd which were first published in 1936 and ran until 1963. This isn’t the first television version, the character has been portrayed a few times over the years, most famously by Doctor Who actor Jon Pertwee in the ITV series that originally ran for four series and then returned for a further two at the end of the eighties. Crook’s is a very different take to that of Pertwee’s however, and given how iconic Pertwee was in the role I had minor concerns he might not have been as good, but they were soon put to rest within about fifteen minutes.

When Jon Pertwee played Worzel it was as a jokey and fairly loud character, full of adventure and excitement as to what the day may bring, and it made for a great series. But Crook plays it in a slightly stranger way, his Worzel is quite the innocent, and his understanding of the world very different to that of the human beings, but it’s just as funny as Perwee’s and for my money much more enchanting. Meanwhile the kids Susan (India Brown) and John (Thierry Wickens) are slightly savvier and proactive than their seventies counterparts, and if anything even more likeable.

There’s obviously quite a few changes made from the original text, initially John and Susan are obsessed with their phones and horrified by the lack of a wi-fi signal at the farm, while the Tree of Tree is located in a supermarket car park and filled with carrier bags, but in many ways it’s more faithful to the books than the 70’s tv series was what with Aunt Sally something of a bully to Worzel rather than a love interest, though Worzel is a bit of a shit in the books and Crook definitely portrays him as a far more likeable character here.

Plot wise this opening episode is quite simple as there’s a problem with the harvest, the weather’s not been what it should have been and so the farmer (Steve Pemberton, superb) is greatly concerned that he might lose everything. As is Worzel, who initially mistakes the kids for scarecrows due to their clothing and is horrified when he discovers he’s revealed himself to humans, but soon enough they’re all good friends and off to solve the mystery as to why the weather has been so strange.

The majority of the humour comes from Crook’s performance which is astonishingly good, he makes Worzel seem odd and otherworldly but yet at the same time it’s easy to see why the kids are so fond of him. His scatterbrain ways and take on existence are quite unique but often very funny, as are the other scarecrows that we get to meet, all of whom are definitely one of a kind but yet still rather charming. That said the kids do get some decent lines too, so it’s not just Crook who has to do all of the heavy lifting humour wise.

Like Detectorists it has that incredibly relaxing feel to it, Crook (who also directed it as well as writing the script) is fantastic at capturing little glimpses of countryside life, the soundtrack is a great one and it’s a merry affair as a whole. It might not be packed with laughs or be the funniest thing you’ll ever see but then it’s not meant to be, it’s just an extremely delightful piece of family comedy drama, and one of the best the BBC has made in ages.

Related Link:
If you’re in the UK you can watch the show on BBC iPlayer here.