Comedy Comics: The Mask – I Pledge Allegiance To The Mask 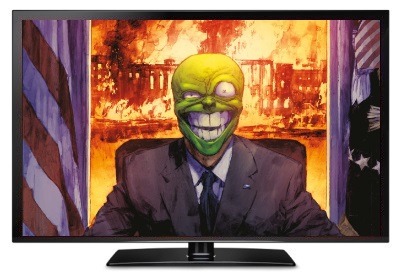 Anyone expecting a wacky character akin to that of the movies will have quite the shock however as this is a grim, fucked up piece indeed which starts with three kids being violently and psychologically abused by their foster parents, at least until The Mask arrives and punches the foster father so hard that his hand bursts through his neck, and then The Mask pumps the mother so full of chocolate syrup that she explodes.

This isn’t a new take on The Mask however, in the original comic the character was psychotic indeed and Stanley Ipkiss was an abusive shit who upon discovering the powers of the mask killed off all of his enemies and a bunch of cops who were trying to track him down. It is the bleakest, grimmest version yet however though, the art by Patric Reynolds is particularly stunning but it’s not cartoonish in the slightest, unlike the original series, which all adds up to it being a disturbingly black humoured bastard indeed.

So though the original comic was filled with dead bodies all over the bloody place, most of the time people died due to insane amounts of bullets being pumped through their bodies and it was an obviously over the top affair. Here the violence is much more extreme but fairly shocking, even for a mostly desensitised old bastard like myself, which made me question whether it’s suitable for Comedy Comics article. But when writer Christopher Cantwell (of the Halt and Catch Fire tv show fame) isn’t portraying misery and desolation the humour is pretty sharp indeed, and as long as you’re not affected by the blood and gore you’ll find plenty to laugh about.

That mainly is the satirical political elements admittedly, but thankfully when it comes to politicians it’s not just of the “Durrr, I like money” kind of satire, Cantwell has some fun exploring the many ways politics is horrendously screwed up, some of it subtle, some of it joyously over the top like The Mask’s own attempt to win over the electorate as in an televised advert he screams “Let’s take off our clothes. Let’s fill our libraries with tears. Let’s steal eggs from India. Let’s make insane demands. America vote for me. No more taxes. Instead, schedule 1 drugs at the supermarket, free of charge. Canada shall be ours. A handgun for every child. Every one of you is a dream deferred millionaire. We will blow up the moon, execute the homeless, steal all the oil, make all the money, create all the jobs. Let’s get one thing straight: This America – My America – is an America that fucks. See you in November at the polls.”

Fans of the original comic will probably be pleased to see Kathy Matthews (girlfriend of Stanley Ipkiss, and Mask wearer herself) running for government, while the cop (and also former Mask wearer!) Mitch Kellaway also returns investigating the various murders, and it doesn’t take long for him to realise that the sentient Mask is back to his old evil ways. However you won’t need to have read any of the comics to get a kick out of it either, as long as you don’t mind extreme violence and vicious satire it’s a series you’ll no doubt enjoy.