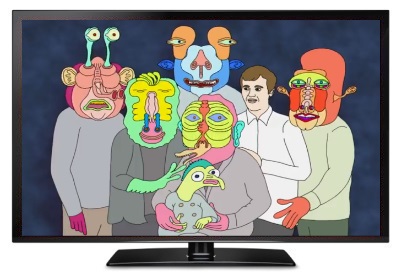 Channel 4 rather quietly released it’s latest collection of Comedy Blaps this week, a selection of pilots from some of the best up and coming comedians in the country. Though I’ve not yet watched all of them I’d be amazed if any were better than Australian comedian Sam Campbell’s sketch show however, as it’s one of the best pilots I’ve ever seen, and due to the site’s ongoing “One and Done” series I’ve watched an awful lot.

Written and starring Campbell, and also featuring Neil Edmonds, Jamie Demetriou, Rob Carter, David O’Doherty, Charlotte Ritchie, Mark Silcox and Annie McGrath among others, it’s an unpredictable, odd, sweet and shockingly funny affair, and one of the least predictable sketch shows that I’ve ever seen. Beginning with a sketch set at a boxing match where one of the contenders doesn’t weigh anything, that causes Jamie “Stath Lets Flats” Demetriou to burst in to song, any regular readers will know musical comedy is a way to get me to fall in love with you instantly in what’s an also oddly sweet sketch.

The warmhearted if surreal nature continues in the next skit where a kid gives a dentist played by David O’Doherty a picture he’s drawn, only for his Dad to give him an even better one that he drew of them both at the world cup final, in a beautifully odd but fantastically funny piece of comedy. That applies to the rest of the show as well which leaps all over the place and so you never know what’s going to happen next, somewhat joyously.

Campbell’s imagination is pretty breathtaking, and he’s got the kind of remarkable comedy brain that comes along all too rarely. So don’t expect catchphrase comedy here, or the same characters making the same joke over and over again, but one varied sketch after another, all of which made me laugh hard. Though special mention should go to one involving a gruff bald man who’s invented a dream machine as it’s such a gleefully daft idea, while one where an understandably grumpy father replaces his son with a creature he made out of bits of rubbish found at a dump is almost as good.

I have to confess to not being aware of Sam Campbell before but on the strength of these fifteen minutes he’s instantly become someone I’m an enormous fan of and plan to catch live as soon as I can. While the sketch show format is alive and well in the US thanks to Netflix it’s been a fair old while since the UK has produced a decent one, but hopefully Channel 4 will rectify that by giving Campbell a full series in 2020.

Related Link:
You can watch the episode on youtube here.