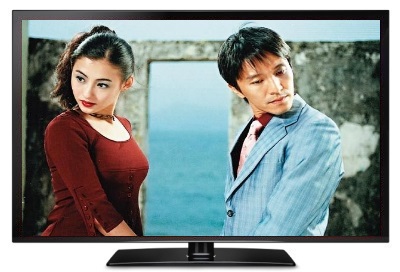 Remakes of film classics have been going for over a hundred years now, with Cecil B. DeMille being the first do such a thing by remaking his 1914 movie The Squaw Man in both 1918 and 1931. But despite this precedent it’s fairy rare for directors to remake their own movies, yet this is exactly what Stephen Chow’s recently done, taking his 1999 comedy King Of Comedy and updating it for the 21st century in the form of The New King Of Comedy.

But was there any need? And is the new film actually better? The answer to both questions is essentially “No”, but it is a little more complicated than that, and despite the most recent film not being as good as the first there are a few reasons why it’s worth watching. The first (and best) reason being that it has a female lead in it who’s the new King of Comedy, and in general it’s treatment of women is far better than in the first.

Not that it’s much of a problem in the first movie, but just that the main two women in the film aren’t exactly role models, with one, Lau Piu-piu (Cecilia Cheung) being a “Club girl” who’s main aim in life is to extort money out of idiotic and rather creepy men at the nightclub she works at. She’s quite a strong character as it goes but the film does sexualize her in a slightly dodgy manner, as she learns from the lead male how to be a better actor and so pretend to be a man’s “First Lover”. Meanwhile the second female lead, Sister Cuckoo (Karen Mok) is an action star, who’s great and everything, just not particularly fleshed out as a character.

The plot for both films revolves around an extra who is desperate to make it in the movies, and will go to any lengths to attain their dreams, but apart from that basic premise they have very little in common and it’s here that the differences really show. In the first film our hero Wan Tin-sau (Stephen Chow) gets in to a lot of ridiculous scrapes and constantly pisses off the director either with his poor acting or his general all round ineptness, and it works as a much better satire of the movies of the time, with much mockery of John Woo style action scenes set in churches and with doves flying all over the place.

It’s a much quirkier affair too as Wan Tin-sau is obsessed with obtaining a free meal from the film set, in one segment he puts on a stage version of “Fist Of Fury” which no one attends, and Lau Piu-Piu is surprisingly frank when it comes to her flirtations with Wan Tin-sau. There’s also a rather strange but oddly funny scene with the latter where he’s supposed to be teaching some gangsters how to extort money but gets distracted by flicking a small child’s penis, along with a surreal ending which I don’t think anyone could have predicted.

The New King Of Comedy is a much more conventional film however, and a lesser creation because of this. Perhaps it suffered from my having watched the first only the day before but it’s just not as funny, and the odder aspects – like our lead Dreamy (Jingwen E.) having plastic surgery but being accidentally given a huge chin and odd nose – will make you smile but not an awful lot more than that. Meanwhile her relationship with her boyfriend is a dour aspect and has a pay off which isn’t as intriguing as the film thinks it is, especially when she almost commits suicide due to it.

There are parts which work effectively, Dreamy is a very likeable lead, the fake film”Snow White: Bloodbath In China Town” is gloriously daft, and the way the director has a PA who announces his presence and / or mood everywhere is a nice idea, while he also persuades his lead actor that Dreamy is dead just to get a reaction out of him in a very funny scene, but in general it lacks the charm and unpredictability of the first film, even if it can’t be argued that it is a far more realistic and believable chain of events which are far more likely to have actually happened.

Stephen Chow is one of the best directors to have emerged out of China and his films are almost all extremely entertaining and likeable, with him being responsible for two stone cold classics in the form of Shaolin Soccer and Kung Fu Hustle. But both King Of Comedy and The New King Of Comedy are lesser works and in some ways it’s strange that he decided to remake it but then not improve upon it, and so while they’re definitely worth watching it’s perhaps probably best if you watch The New King Of Comedy first if you don’t want to be disappointed by it.