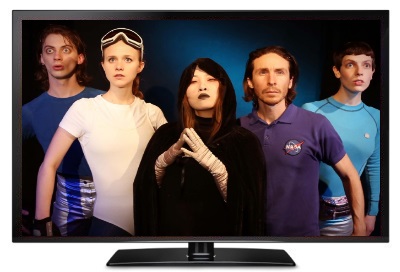 2100: A Space Novelty
This is a superb homage to some of the crazier sci-fi flicks from the seventies and eighties, produced by the Cut Mustard Theatre group and which played at the Cockpit Theatre last week. After a terrible nuclear explosion takes place on our beloved world, NASA astronaut James is the last man on Earth, albeit 253 miles above it as he’s living on the International Space Station. He’s only got a computer for company and he’s running out of hope that anyone might have survived on the planet below, as well as food and oxygen, and so decides to take one last walk out in to space. But seconds away from death he’s rescued by a mysterious alien race, and a whole new adventure awaits. A play which was smart and funny and avoided some of the obvious gags such a production might make, concentrating on the storyline to make you laugh rather than mocking some of the more tired tropes it would be easy to take the piss out of in this sort of thing, you can read my full, very positive, review here: https://viewfromthecheapseat.com/2019/11/15/2100-a-space-novelty-the-cockpit/ and hopefully it will be restaged in the very near future.

Silicon Valley Season 6 Episode 3
Shockingly this was another episode of Silicon Valley where something had gone wrong for Richard and his Pied Piper team, as yet another evil bastard tried to gain control of the company. It looked like his issues might have been solved with a rather convenient meeting with Gavin Belson which saw him discover how to solve his problem, but of course Gavin refused to help and so everything was once again far more complicated than it would have been if these people were even vaguely not cunts. But they are, and so hilarity ensued, or, er, at least a few smiles? Yep, that was about it, these are characters I find amiable enough (well, bar Richard) and I am involved with their stories, but it’s a formula that’s beyond tired now and even the regular subplot with Gilfoyle and Dinesh was poor this time around, seemingly only present to set up a convenient finale where for once Dinesh came through and saved the day. There were some quietly amusing bits in the episode, mostly involving Jared who in sunglasses being all surly made me briefly laugh, and Gavin cheating at a triathlon and Dinesh’s speech winning the day made me smile, but laughter only rarely took place, and though I still like the show I just wish it was as good as it once was and I’m definitely glad it’s now ending in a few weeks time.

Zomboat Series 1 Episode 6
So at the beginning of the series one finale it looks like our motley crew had survived the apocalypse having reached the outskirts of Birmingham and been met by the army who have sectioned the area off. And then it got even better, for Jo at least, as she met her beloved Rob and was overjoyed to be reunited with him. But Kat had a feeling it had been far too easy to survive and was quickly proven right when the shockingly inept army were overrun by zombies, in a bit of a dodgy moment where they only had to kill about ten but failed miserably, and chaos broke out and the gang were separated. That at least lead to the first funny moment of the episode when we got to see a naked Amar (and the reason for his not wearing clothes raised a smile too) but most of the episode was plot heavy and it wasn’t until the end where we get another decent joke, which involved some brutality with someone’s arm. Once again it relied too much on pop culture references for humour (this time mentioning 1995’s Outbreak a lot) and just wasn’t as good as it should have been, but despite my many quibbles I do like some of the characters (Sunny and Amar, anyhow) and would like it to return, though if it does a couple of extra writers would be appreciated.

On A Clear Day You Can See Forever
Barbra Streisand hasn’t made many films but most of the ones she did prior to 1992 were pretty special, and that includes this bizarre but fantastic musical where her character wants to give up smoking and so goes to see a professor at a university who specialises in hypnotism (suave French crooner Yves Montand), only for him to discover she had a crazy past life romance in Victorian England. Naturally he thinks it must be some kind of mad scam at first and is deeply sceptical but after a while finds himself enamoured by her tale, and the woman that she used to be, even though she’s engaged to be married and likes to flirt with her former brother-in-law Jack Nicholson. So yeah, it’s a weird old story and then some but the songs are mostly superb, Streisand’s superb in the lead role, full of moxie and then some as they used to say, and it’s often delightful and bursting with charm.
.
Video Of The Week
Tim Vine has started a new youtube channel and is promising to post new content every week, Vine’s brand of punning may not be to everyone’s tastes but I’m very fond of the man, and the first two videos uploaded are nicely amusing clips, so I’m greatly looking forward to seeing what he presents us with over the course of the next 50 weeks. https://www.youtube.com/channel/UCwgr5u9C9ehXjn98UP1_meA

Link Of The Week
Bottom is of course one of the finest British sitcoms yet made and if you’re fan of Adrian Edmondson and Rik Mayall’s unique brand of anarchic madness than this podcast is for you, where Paul Tanter, Mat Brooks and Angela Johnson discuss the show episode by episode and explore just why it’s so fantastic, and prove themselves to be a very funny trio in their own right. https://podtail.com/en/podcast/talking-bottom/