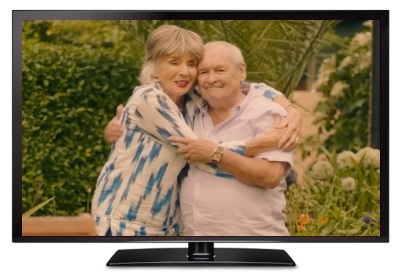 This brand new comedy on Gold (normally the home of repeats of Dad’s Army and Gavin and Stacey) has quite the cast what with it starring Joe Wilkinson, Diane Morgan, Sue Johnston and Bobby Ball, while Sarah Parish and Nigel Havers have supporting roles. Those behind the scenes are equally impressive too with it written by Wilkinson and David Earl (aka comedy character Brian Gittens) and directed by Steve Bendelack, the man behind every episode of The League Of Gentlemen, Cowards and the greatly underrated The Harry Hill Movie.

It’s a very gentle and sweet family sitcom, where Simon (Joe Wilkinson) and Donna (Diane Morgan) start the show travelling on a ferry to the Isle Of Wight, amusingly arguing with his parents on the phone about how to get to their house, and when they do we’re properly introduced to not only his mother Sue (Sue Johnston) and Step-father Ray (Bobby Ball) but also his geeky step-brother David (Ben Rufus Green), and it’s revealed that they’re all present to celebrate Simon’s fortieth birthday.

Other than that not much really happens, it’s just various scenes with the family chatting away, be it over the course of lunch or while having an afternoon walk. That’s no bad thing at all though, and the lack of any form of physical comedy or big set piece isn’t to the show’s detriment in the slightest as it excels at fleshing out these characters in a delightful way, as we get to see all of their odd quirks and eccentricities and the way they affectingly tease each other.

So while it may not initially seem like the most hilarious show in the world there’s a lot of surprisingly amusing moments, from Sue’s computer password problems (and the fact that it’s “shitpie17”) to David keeping a bread knife by the toilet as he has a diet which mostly consists of cereal, and Ray having his reasonably grim toenails clipped for him by Sue because “It turns him on”. It also has some strong supporting characters as well, like Andre (Jeff Mirza) the straight talking gardener who after being offered quiche casually comments “I don’t usually like your food Sue…That’s horrible” while one of the best scenes has Simon’s father Larry (Nigel Havers) making an appearance with his new girlfriend Melissa (Sarah Parish) and being congratulated for his attempts at staying young in a genuine manner by David.

Towards the end Simon gets a bit snarky with Ray but that’s about as dramatic as the episode gets, and I’m glad there wasn’t any forced hilarity or ridiculously contrived farce as it wouldn’t have fit the tone of the piece. In some ways it captures the sweet, affecting feel of Detectorists as we watch these characters potter around, indeed if anything even less happens in an episode of The Cockfields than it tended to in Mackenzie Crook’s gorgeous slice of countryside life. It’s not quite as fantastic as that was just yet but then this is the very first episode and so it’s a bit unfair to compare the two of them at this point, and the fact that it is already even comparable is an enormous compliment as it is.

If there’s a tiny issue it’s that the extremely talented Diane Morgan isn’t given an enormous amount to do other than look slightly bemused or exasperated at the madness that surrounds her, but again this is the first episode and hopefully that will change over the course of the series. Otherwise this is an extremely charming, thoughtfully written and pleasingly funny series, which has already established an impressive selection of characters, and I can’t wait to see what happens to them next, even if it isn’t very much at all.