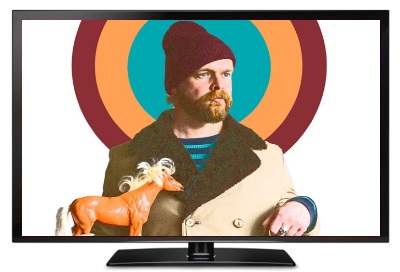 Five minutes in to Paul Currie’s latest show and he’d already taken to the stage wearing a dress before stripping down to his white underpants and rotating on a circular rotate-y thing (and yes, it is incisive writing like that which earns me the big bucks) and then sung a song using an old typewriter as a musical instrument, and by this point I was already convinced that not only was I going to enjoy his show an enormous amount but that it might be one of the best I’ve seen all year.

That did indeed prove to be the case as well as Currie presented an hour of surreal absurd madness which was shockingly funny, it might not always make perfect sense but that doesn’t matter in the slightest as Currie takes the audience on a crazy old ride which sees him sing a selection of songs about gloves, use a tape measure to measure the audience, perform Torvill and Dean’s famous version of the Bolero with an audience member, wander where the rabbits are, and host a quite unique fashion show. And that’s just the tip of a particularly demented iceberg.

There’s occasionally some slightly semi-serious segments too, or at least they have a sentiment which is serious but which Currie still makes amusing, anyhow. So at one point he discusses how he was bullied at school (starting with a Top of the Pops style countdown of the most memorable bullies) and also talks about his sexuality, which begins with a daft song about having had a penis in his bum, and his mouth, but ends on an impassioned statement about how we shouldn’t label people sexually.

Similarly there’s also a part about mental health, with Currie mentioning his fondness for Margot Kidder, and acting out a scene from Superman that she’s in (which is the reason he’s brought the dress along with him), and he also has thoughts about how toxic masculinity should be renamed “Toxic humanity”. The latter is something I’m not completely convinced by but everything else that he suggests is pertinent, and something all will hopefully agree with as well.

The above two paragraphs may make you think it’s a slightly preachy show but that’s not the case in the slightest, the majority of the set is some truly glorious comedy of the kind that I’m convinced the entire audience will never forget. I certainly won’t, and my only issue with it is because it was so great I’m now incredibly frustrated that this was the first time I’d seen him perform live, but it definitely won’t be the last as Trufficle Musk is a deranged masterpiece, and I’ll now without doubt see each and every new show he puts on.