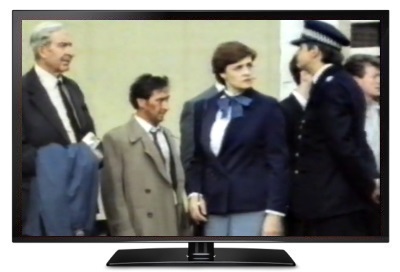 Some sitcoms are never repeated because they’re outright bad, painfully unfunny and filled with stock characters of the likes so horrendous that you wish the death penalty could be brought back for them – well, that’s my memory of Up The Elephant And Round the Castle, anyway. But A Small Problem has been all but forgotten because it received a large number of complaints as audience members didn’t realise it was a satire and thought this dystopian series all about a world where “Shrimpers” (ie any one under five foot tall) are seen as a lesser race, and segregated and forced to live in South London, was meant to be an attack on anyone who was vaguely short.

Given that one of the leads was Christopher Ryan (best known as Mike from The Young Ones), the show has a jaunty theme tune (with the lyrics “They’ve got small bodies and small minds, they’re all small fry and small time, they’re the lowest of the low, they refuse to grow you know. And they like it down there”), and it has a laugh track throughout, it’s hard to imagine how anyone could have taken it seriously and thought the BBC really did hate anyone who wasn’t that tall. And yet they did, which seems to prove that people were pretty damn stupid back then, and also that they were complaining about the wrong thing as it would have been far more understandable if they’d been moaning about the fact that it’s a one note affair with pretty much the same joke hammered home time and again.

The show revolves around two main characters, the first being Roy Pink (Mike Elles), who lives a normal life until the Government decides to change the definition of a small person by a couple of inches to that of Europe’s, and suddenly he’s reclassified as one and his life is torn apart as everything is taken away from him including his house and his dog, with his neighbour callously commenting “Don’t worry about the dog, it didn’t suffer, one shot Mrs Thomas said”. Roy’s forced to move to South London in a ghetto which looks worse than Sheffield did after the bomb went off in Threads, and it’s here he meets the other main character, Howard (Christopher Ryan).

Howard’s a chirpy, seemingly casual character who tries to help Roy settle in, but it’s quickly revealed that he’s a terrorist, part of the”Small Liberation Front” who are behind a wave of recent bombings and he has an ulterior motive for being so nice to Roy. Despite being behind the explosions and possible deaths Howard’s much more likeable than Roy as he jokes about and appears to take nothing seriously, whereas Roy spends the entire series deeply upset at being considered a small person and spouts “Heightist” nonsense, making unpleasant comments about midgets and dwarfs at an alarmingly frequent rate.

Over the course of the series the story goes round in circles as tall folk keep on abusing smaller types and Roy keeps on insisting that “I’m not one of you people” despite getting arrested and subsequently disowned by his family as they’re so ashamed of being linked to someone who’s only around the five foot mark, and he also keeps on trying to get the authorities to change their minds. Meanwhile Howard’s mostly hanging about the ghetto, biding his time and planning the occasional acts of terrorism, one of which finally moves the plot forward as it leads to Roy being thought of as public enemy number one.

As well as Roy and Howard there’s some supporting characters including Fred (Dickie Arnold) and his wife Lily (Christine Ozanne) who live in the same ghetto as Roy and hold resident’s meetings which never get anything done (ah, Thatcherite satire, don’t you just love it), and Roy’s brother George (David Simeon) and sister in law Heather (Joan Blackham) who are horrified by Roy’s continual desperation to be reclassified as a normal human being, and only want him to go along with their plan to pretend to be dead so that he’s not an embarrassment.

There’s also a Japanese couple called Mr and Mrs Motokura (Tetsu Nishino, Sayo Inaba) who are visiting the UK to find a site for their new factory, only to be arrested by over zealous policeman and forced to live with Roy, Howard and co. The treatment of these characters is a tad dodgy in the first episode and it borders on being racist at times, but thankfully the characters are fleshed out over the following five episodes even if there are a few too many jokes at their expense concerning how no one can understand them. But this shouldn’t come as a real shock to anyone as most are treated dodgily in this show, and only Howard is seen as a decent guy, somewhat ironically given his love for explosions.

It’s a show which is all kinds of complicated, as much as I’d like to be positive about it there’s an enormous amount of issues concerning the writing. For one thing it’s meant to be a metaphor for Apartheid yet the way the small people are treated is played for laughs and so the comparison is a pretty offensive one given the misery and deaths that took place in Africa during this period. But even if you consider it just a satire on anyone who was classed as a minority and treated poorly it’s still problematic, if only because of the lack of variation and how it mainly spends the running time getting laughs out of people being treated in a horrible manner.

That’s not to say that occasionally the jokes don’t work, there’s one pretty funny moment with George listening to an episode of The Archers where they’re killing “Smalls” left, right and centre, also amusing is an interview with Fred that’s re-edited to make him look monstrously violent and evil, and there’s a report on the news about a future Eastenders storyline seeing Dirty Den running off with a small too which made me grin, and much of the satire of the media works effectively.

Given that the series is three hours long those funny moments really are few and far apart though, most of the time the subject is tackled without any subtlety or nuance and the repetitive nature soon becomes tiresome. The bleak ending doesn’t improve matters in any way either, presumably they were hoping to be given a second series but as that didn’t happen it only serves to suggest that the characters have no hope in their lives, and will continue to be treated appallingly. Which may be realistic, but it’s yet another aspect of the series that is not only misjudged but also which fails to amuse.

Related Link:
You can watch the first episode here.