Review: A Funny Thing Happened On The Way To The Forum 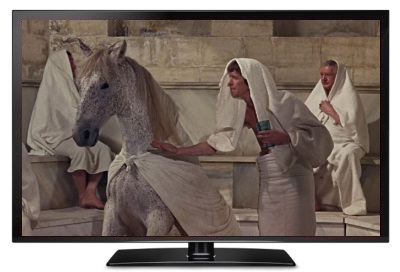 Recently I asked some friends for recommendations when it came to 1960’s musicals as I’m a big fan of the genre but somehow haven’t seen many from that particular decade. A Funny Thing Happened On The Way To The Forum was suggested by four different individuals as a film I’d love, and now I’m going to have ignore anything they ever recommend for the rest of my life as it really is quite the dodgy piece, with a cast that should have provided a lot of laughs but fail to do so due to a lacklustre script.

Set in Rome a couple of thousand years ago it sees slave Pseudolus (Zero Mostel) desperately trying to win his freedom, though his attempts threaten his life if anything, at least until he persuades Hero (a young Michael Crawford), the son of his owners, to let him go free if he can help him get together with a prostitute, Philia (Annette Andre). Because this is nothing if not a classy affair after all. The brothel is owned by Marcus Lycus (Phil Silvers) who has promised Philia to a swarthy Captain, and everything is made all the more complicated when Pseudolous’s owner Senex (Michael Hordern) also falls for the girl, despite being married to the dominating Domina (Patricia Jessel).

The film’s biggest problem is it’s treatment of women, who are either sex objects or moaning wives who are never happy with their husbands actions, and who are portrayed in a negative light despite having every reason to be fed up with the shitty behaviour of their spouses. But if you can somehow ignore that it’s also disappointingly unfunny for a good half of the movie, relying on slapstick which is lazy and tiresome, Michael Crawford spends most of the movie running about all over the place in scenes which aren’t even a tenth as funny as those found in his sitcom Some Mothers Do ‘Ave ‘Em.

The dialogue is often weak as well, with Phil Silvers apparently enormously unhappy with the script that he was given to the extent that he was almost replaced by Jon Pertwee, who appears in the film in a very minor and thankless role. Half of the songs from the stage version were thrown out and the six songs that we do get here disappoint, they have the odd funny line and are staged effectively but all too often they’re annoyingly sexist and the Captain’s song where he brags about abusing women is grim stuff indeed.

Buster Keaton has a role which is only slightly more than an extended cameo but like most of it’s talented cast the film wastes him right until the very end. The finale is entertaining and the last twenty minutes are filled with some genuinely funny moments, but given the hour which precedes it is so bland that it’s definitely not worth the wait. It’s not a disaster and some of the cast give it there all (Hordern, Crawford and Jack Gilford) but too much of the time it’s a sloppily edited trivial beast, and not deserving of the acclaim it’s received over the years.