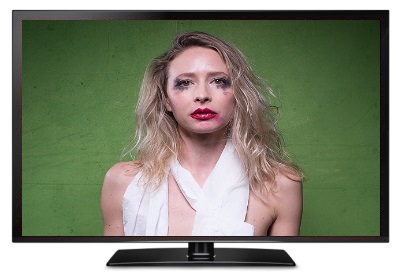 There’s been a lot of comparisons made with Natalie Palamides’ hit show Nate as both see female comedians / clowns take on a quite unique character, interact with the audience, and both were developed with the assistance of Dr Brown (aka Phil Burgers) whose own work is greatly acclaimed and sees him often confound those who attend his shows. But Courtney Pauroso’s Gutterplum is a very different beast to Paladimes’ Nate and Brown’s own work, and one which deals with very different themes.

It starts with Pauroso on stage in a curly brown wig and glasses, looking very tomboy-ish as she sits on a large gym ball casually chatting with the audience and introducing herself as Dale Ravioli, before mentioning that she’s looking for a new friend. One is soon found in the audience in the form of a likeable and very chatty South American man called Juan who joins her on stage to kick around a beer can, before playing a game of leap frog and having a piggy back ride. It’s all innocent fun and quite charming, but then Dale has her first period, and transforms in to a beer drinking, cigarette smoking blonde and everything changes completely.

The rest of the show revolves around Dale at certain points in her life, and Juan is heavily involved throughout, often coming back on to the stage to interact with Dale. Because of this the show may vary quite a bit depending on who the audience member involved is, and how happy they are to take part, but Pauroso is a talented improviser and reacts impressively to the unexpected (which tonight not only included Juan’s various comments but another audience member eating snacks incredibly loudly) so I doubt it’d ever lead to a bad show.

Nate was largely about issues of gender, consent and toxic masculinity, but Gutterplum while still quite shocking in places is a more optimistic piece, an insight in to the nature of youth, love, and the changes that take place as you grow older. It’s not a show which has any great insight in to these conditions but in this case it’s not actually a bad thing as it’s just a joyously crazy piece of comedy which contains a performance from Pauroso that is quite frankly unforgettable, an astonishingly strong bit of clowning of the likes that will make you laugh a ridiculous amount.

It’s a show which isn’t for those who like their comedy to be conventional, and it contains a couple of moments which could plausibly offend some, but Pauroso has created a character who is gloriously unusual yet also oddly endearing and engaging too. It’s a fantastic piece of modern day clowning and one of the best debut shows I’ve seen from a comedian, so if you want to witness the birth of what’s most likely to be an incredible career I’d suggest heading down to the Soho Theatre asap.

Related Link:
Courtney is at the Soho Theatre until Saturday 21st September, and further information and tickets can be found here.