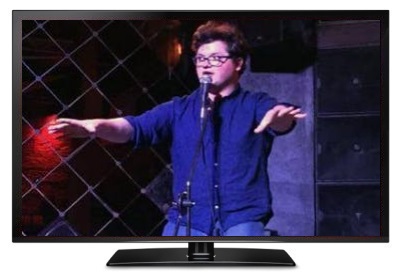 It’s something of a cliche to start a review of a comedy show with words along the lines of “You’ll never have seen anything quite like this before” but unless you know of another comedian who programmes their own games and lets the audience play them during the set then I’m pretty sure it’s definitely true. And despite being a huge amount of fun the games are the least impressive element of this latest hour of comedy from Hart, a work in progress that is already a strong four star show.

The game playing aspect comes right at the beginning, starting with an auto runner game where Hart’s programmed it so that when the audience cheers the runner jumps in the air, and then he presents us with another game where again it’s reliant on the audience making a lot of noise, but this time pitch comes in to what direction the character moves in. Best of all however is after Hart suggests we connect to the net with our phones we play a version of Space Invaders where the audience are the evil alien types and he’s the one trying to kill us, and if we’d just played this game for the hour this would still have been a rave review.

I’m glad that wasn’t all there was to the set however as despite clearly being a great coder Hart’s stand up is even more impressive, with the following forty or so minutes being all about his sexuality and how he’s had something of a renaissance when it comes to his being gay, or as he calls it, his Gay-aissance. He starts with talking about his relationship with games when he was younger, being turned on by topless fighting in Metal Gear Solid and playing the character Curtis in Tomb Raider The Angel Of Darkness, all of which amused no end. This material, and various parts of the rest of it, are accompanied by a slideshow to illustrate aspects of the story but while in no way bad it’s not especially needed as Hart’s material is incredibly funny as it is.

A brief diversion follows where he talks about the reality tv shows he loves (Naked and Afraid, Doomsday Preppers and Queer Eye) and how during his Gay-aissance he connected with gay cinema as well, including films like Call Me by Your Name where he has a smart bit concerning his confusion over a prospective sequel given how that film ends. It’s likeable stuff without a doubt and there’s never a part of the hour which is less than hugely enjoyable, but it’s the only part of the show I didn’t love as though it was material which made me laugh unlike nearly everything else it was a little forgettable.

Following on from this was a far better part where Joe showed us the games he wishes he had the time to programme and make gayer, like his version of Pokemon and Sim City, both of which he had a lot of incredibly strong jokes about, and it’s the material concerning the former game which allows him to discuss dating apps and the various relationships he’s had, all of which was not only insightful but extremely funny too. It then came to an end with an extended metaphor about how when it came to his sexuality it was like he was playing Pacman when everyone else was playing Mario, which he carried off with aplomb.

I did have a couple of very minor criticisms, like how it would have been better if the parts where the audience plays the games was spread across the show, but right at the end Joe addressed this and was fully aware that it would work better like that too. A couple of times during the set he also mentioned cutting a joke, and his self-awareness suggests that though it’s a show which is already already extremely likeable, by the time he’s happy with it it should be very special indeed.