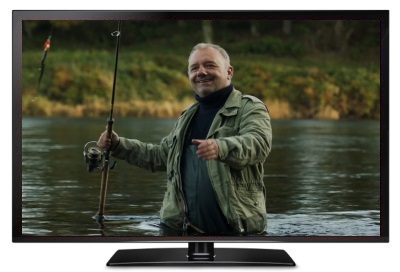 Bob Mortimer may well be in the top three funniest British people alive, in his work with Vic Reeves he’s been astonishingly funny and mad and surreal and hilarious, while his appearances on panel shows like Would I Lie To You? see him think on his feet with astonishing ease and have led to me laughing so hard I’ve feared I may never stop. And Paul Whitehouse is a comic actor and writer who has consistently produced some of the best British comedy of the last thirty years, so putting them together should lead to comedy gold, right? If not comedy palladium, which the internet informs me is an even rarer precious metal.

But the first series of this show was something which only occasionally worked, Paul Whitehouse was surprisingly irritated with Bob on occasion, taking the fishing element of the show a little too seriously, and though the conversations they had were often very funny sometimes they were sometimes a bit dull or stilted too, and though I adore both men watching each and every episode occasionally felt like a bit of a chore when it should have been a delight. Fortunately the second series has remedied some of these issues, and Whitehouse is more relaxed (at least some of the time) and mostly finds Bob’s attempts at fishing funny rather than infuriating.

Each episode is still something of an unpredictable beast however, certain parts can be very, very funny, like in this episode where they come up with intentionally terrible nicknames for each other, and Bob asks inane questions just to annoy Paul, but then we got Bob chatting to another fisherman who seemed lovely but who was unfortunately rather bland, and even though Bob talked about the depression he suffered from when younger it wasn’t anything even close to being insightful, and ultimately the segment felt pointless. After this it got even more insipid as when they arrived at the accommodation for the evening the conversation became rather tedious and I’m not sure why it wasn’t cut from the episode.

The unpredictable side to the series continued the next morning, Bob preparing breakfast and doing silly accents amused to a certain extent but it was by no means the kind of thing that would have any one rolling on the floor with tears in their eyes. Their playing golf saw the show take an upswing (which turns out to be a golf pun, but I had no idea while writing it I promise) but then when they returned to fishing it quickly became far duller. There was some discussion of comedy and confidence which was fascinating, and I’d love it if they talked about their careers and views on comedy in general, but such parts are sadly few and far apart.

There is a relaxing element to the series and shots of the countryside are undoubtedly beautiful, but that’s not what I come to a show like this for. As much as I love these two men the gag rate just isn’t high enough, and as I have absolutely no interest in fishing that side of proceedings doesn’t work either, even on the rare occasion that they catch one of the bloody things. It’s a real shame as there have been times that this series has been a delight, but due to the far too many banal moments it’s something I can’t really recommend, and I doubt I’ll watch another episode after this.