The Comedy To Watch Is One Year Old Competition! 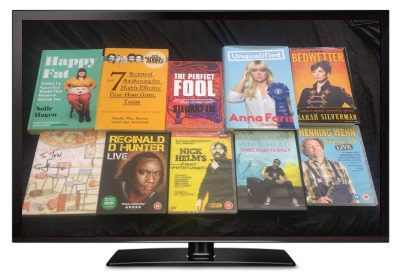 Yep, it may only feel like 329 days but it has been a whole full year since this site was launched, and over that time, we’ve published over 421 posts, a possibly great selection of articles and reviews concerning tv shows, live gigs, films and stand up specials, along with all of the regularly updated features. And to celebrate the fact that we’ve not committed suicide during this time we’re giving away a whole bunch of dvds and books to one lucky winner!

The prize is as follows –  5 of the funniest dvds around:

And 5 of the best books by comedians:

Update: This competition is now over, and @mostbutnotall was the winner of it.

Rules and Regulations: This competition is only open to people in the United Kingdom. Sorry to anyone who can’t enter it, but chances are the dvds wouldn’t work in your country, and we can’t afford the postage to anywhere else. We also have the right to change the contents of this prize if we so wish (but we won’t, I promise). This competition closes at midnight on the 14th of August, and the winner will be announced here and via twitter. Entry to the competitions is restricted to one entry per person please, multiple entries will be disqualified, as will automated entries, bulk entries or third party entries. Winners will be chosen at random from all valid entries. Winners will be contacted via twitter, the judges decision is final and no correspondence will be entered in to. Comedy To Watch is compliant with the data protection act, our policy is such that we will not pass on your details to any third party. Finally – thank you for visiting the site over the past year , and good luck!