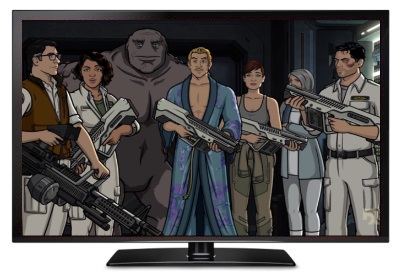 When this episode was written Archer hadn’t been recommissioned for another season and this could have been the very last episode. And as last episodes go it would have been a fairly okay one, nothing astonishingly good but at least it had some pretty funny moments, and a plot which involved not only Archer facing off against his arch nemesis Barry but also finally coming out of his coma. But it would have definitely been a frustrating beast too, as certain questions which should have been answered never really were.

The opening segment at least showed just how good this show still can be, with Archer on trial after his horrendous attack on Lana in the previous episode when Archer was hallucinating like crazy. That attack was probably the worst thing Archer has ever done (which is saying something) but understandable considering his screwed up state of mind, and that this is a coma dream after all. But though the trial was packed with superb lines from all of the cast, with Carol and Ray being on particularly fantastic form, the attack itself still feels a little odd and strange as other than suggesting that Archer knows at heart that he can be an utter monster at time it served no real purpose, and however awful Archer has been over the years in real life he’s never been that bad.

At least the episode continued to be funny even if it being satisfying was out of the window, with the following holodeck segment making good use of the fact that they were out in space for a change. The space setting has been effective at times, like in the sentient bomb episode, and last week’s Star Wars homage, but all too often the episode’s could have been set anywhere so it’s been a disappointment that Reed and co didn’t make better use of it. And again logically it didn’t make complete sense, for instance why Cyril was (briefly) finally the hero given that this is Archer’s imagination didn’t quite add up, but at least the jokes were strong and the dialogue amusing.

Alas that didn’t last as after the ship exploded we got a somewhat pointless selection of clips of the show at it’s best from previous seasons. It’s inclusion was once again something that wasn’t really needed, and it highlighted that though the series can be amazing this most recent season didn’t really compare. At least we did get to see Archer out of the coma at the end, and the reveal at the end that Mallory genuinely cared for Archer was sweet, but it didn’t get me as excited as I thought I’d be, and I can’t honestly say I’m that intrigued as to where the show will go next, especially as Adam Reed is only coming back for one episode as a writer.

This season really has been an odd mix of the great and the awful, and it probably should have been the last given the unpredictable levels of quality. The episodes Reed didn’t write were sometimes weak so I’ve concerns that season eleven will really disappoint, but also even when Reed was behind the scripts it was often a show running on autopilot and out of steam, with too much lazy bantering and little imagination on display. I’ll still check out next year’s batch of episodes as I’m fond of the characters, and I do hope I’m wrong, but like this past season I’d be amazed if there’s any real reason for it to exist.