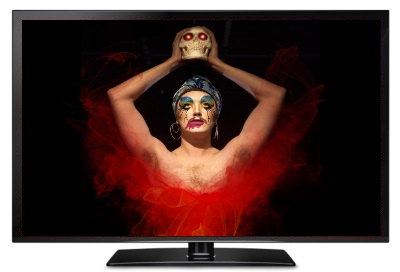 Séayoncé is a legendary ghost-whisperer and baddest bitch in the spirit world, who’s returning to the Edinburgh festival this year to summon history’s late and great celebs, breathe some life back into the dead, and dish out some spiritual sauciness along the way. Séayoncé’s triumphant debut hour at the 2018 Fringe was all about opening our third eye (and our legs) to tap into the celestial wisdom of past superstars and find out why today’s millennials are so shit at love and it was described as “Great fun to be around, and it’s almost impossible to avoid getting caught up in the ridiculous, camp fun” by The List‘Queer, and “Outrageous, blasphemous and daftly infectious” by The List. The creation of Dan Wye, his brilliant comedic timing, high calibre theatrics and bravery in bending gender boundaries and elevating queer performance make him mandatory Fringe viewing. Here Séayoncé talks about her new show Déjà Voodoo, her thoughts and feelings about the Edinburgh festival, the time someone thought her mime of a cat was of someone “eating ice cream through a curtain”, and how Séayoncé and Whoopi Goldberg working together could end all of the world’s troubles.

Comedy To Watch: How would you describe your comedy to someone who wasn’t previously aware of your good self?

CTW: And what can you tell us about your Edinburgh show?

Séayoncé: My show is a dragtastic, comedy, cabaret séance ran by the legendary ghost whisperer Séayoncé. We will contact the dead, read peoples’ futures, delve into some voodo and also contact an ex-lover from the darkest depths of hell. This exploration of the supernatural will be combined with character comedy, songs, lip-syncs and mystical audience interaction.

CTW: What are your favourite things about the festival?

Séayoncé: I love how every nook and cranny is filled with some of the most incredible projects and talents the industry has to offer. The fact you can walk into a damp, dark basement whilst exhausted and hungover and watch something that totally inspires and revives you is amazing.

CTW: And are there any aspects you don’t like?

Séayoncé: Around week three I have a deep-rooted hatred and fear of all flyerers, including myself when flyering.

CTW: When it comes to stand up, how do you feel you’ve evolved since your first ever gig?

Séayoncé: I have evolved a lot, when I first started out I was just doing stand up about being gay and alone (I know, revolutionary), but I wanted to be able to perform more and sing and do characters and have more fun on stage. That’s when I developed Séayoncé and I have been able to perform in so many different venues and meet so many different people who exist in the comedy world but also the drag and cabaret worlds, which makes things a lot more fun and interesting.

CTW: What’s the funniest thing that’s happened to you since you started performing?

Séayoncé: I love the things audiences come up with when interacting with them, in my old show I was doing a mime of a cat but which could also have been construed as something quite sexual and I asked the audience what it was, a woman shouted: ‘eating ice cream through a curtain’.

CTW: If you could change any element of the stand up scene, what would it be?

Séayoncé: I would want it to be more inclusive, not just for people from different backgrounds who represent different communities, but also different genres of comedy. Working within the comedy world but also the cabaret and drag world I am inspired by so many different varieties of performances that you don’t get to experience in many comedy forums.

CTW: Apart from what you’ve already done, is there anything else you’d like to do in the comedy world?

Séayoncé: I would love to tour more and not be poor.

CTW: And if money were no object, and you could collaborate with any living comedian, what would you like to create?

Séayoncé: If money were no object I would love to collaborate with Whoopi Goldberg she has been my idol since my past life. I’m thinking bringing my character Séayoncé into Sister Act would end all world troubles.

CTW: Finally, if you could interview yourself, what question would you most like to ask? And what would the answer be?