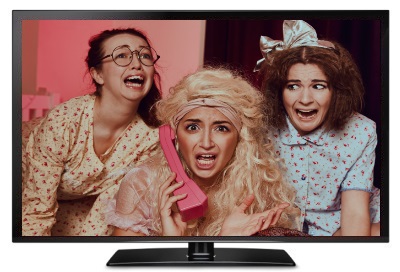 Natahsa Granger and Kerrie Thomason’s Scream Phone is a spoof horror musical – think Scream meets Clueless – which is based on the retro classic game Dream Phone. Directed by the acclaimed Tom Parry of Pappy’s it sees a classic 80s American-movie sleepover go wrong, and features an oversized pink phone and a killer journey back to the 80’s with an infectious and original soundtrack based on female hits of the era, so you’d be crazy not to go and see it. After the runaway success of their debut show 2 Become 1, this is Swipe Right Theatre’s second, brand new, deliciously dark musical which has already garnered acclaim, with To Do List saying “Only a cold-hearted fun-phobe could fail to be won over by this horror-pastiche romp – and only a liar would say it doesn’t leave them yearning for those innocent days of the Dream Phone! ★★★★★”. Here Natasha and Kerrie tell us about the show, their thoughts and feelings about Edinburgh, what happened when a cast member accidentally got hit by a prop brick, their favourite joke, and how they’d like to make a movie with Tina Fey which would involve eating Percy Pigs in their pants and singing 80’s songs while (perhaps) crying.

Comedy To Watch: How would you describe your comedy to someone who wasn’t previously aware of your good self?

Natasha and Kerrie: Silly, musical and full of nostalgia. We love the music of the 80s and 90s so base our shows around the pop culture of the time – any excuse to sing some Cher.

CTW: And what can you tell us about your Edinburgh show?

Natasha and Kerrie: Scream Phone will take you on a KILLER journey back to the 80s! Think Scream meets Clueless with a bunch of songs thrown in (because why not?). We join three best friends having a good, old fashioned girly sleepover, but things start taking a spooky twist when their oversized pink phone won’t stop ringing. If you’re a fan of shoulder pads, questionable American accents and murder (who isn’t?) then this is the show for you!

CTW: What are your favourite things about the festival?

Natasha and Kerrie: Having all the wonderful shows at your fingertips is amazing. And then, being able to meet all the incredible people behind those shows is such a privilege. And lastly (and maybe most importantly), the food!!! Hula, Mums, Caravan. We could go on…

CTW: And are there any aspects you don’t like?

Natasha and Kerrie: Flyering in the “glorious” (*cough cough*) Scottish weather can be quite disheartening.

CTW: How do you feel you’ve evolved since your first ever gig?

Natasha and Kerrie: Basically, we’ve learnt what the heck we’re doing. Our first few gigs back in 2015 were just trying to find our strengths in performing, which turns out to be gyrating while singing (who knew?).

CTW: What’s the funniest thing that’s happened to you since you started performing?

Natasha and Kerrie: There’s been a few, but the first thing that comes to mind was when one of the members of the cast got accidentally hit with a prop brick (don’t ask) and had to act the rest of the show with a “broken leg.”

CTW: If you could change any element of the stand up scene, what would it be?

Natasha and Kerrie: EVERY SHOW MUST INCLUDE A DOG.

CTW: Apart from what you’ve already done, is there anything else you’d like to do in the comedy world?

Natasha and Kerrie: We would love to travel with our show. We reckon it would go down a treat in the likes of Adelaide and Perth fringe.

CTW: And if money were no object, and you could collaborate with any living comedian, what would you like to create?

Natasha and Kerrie: To just be in a room with Tina Fey would be incredible, never mind creating something. BUT if we had to it would be a movie, quite “Charlie’s Angels”-esque, but if we’re honest there would be less action and more eating Percy Pigs in our pants and singing 80s songs while (perhaps) crying. Who wouldn’t want to watch that?

CTW: Finally, if you could interview yourself, what question would you most like to ask? And what would the answer be?

Natasha and Kerrie: Question: What’s your favourite joke? Answer: What kind of bees make milk? …BOO-BEES! (Please come see our show – this joke is not in it.)

Related Links:
Scream Phone is on at the Gilded Balloon Downstairs from Wed 31 July – Mon 26 August at 5pm and further information and tickets can be found here.
A trailer for the show can be watched here.
Swipe Right Theatre’s Official Site.
And you can follow Swipe Right Theatre on Twitter by clicking here.