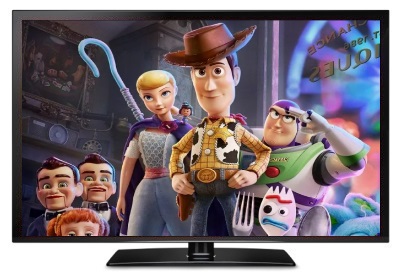 When Toy Story 3 was first announced there was a lot of speculation that there wasn’t really any need for another film in the series, but that turned out to be a beautifully affecting and engaging film which served as a perfect end to the trilogy. So when Toy Story 4 was put in to production somewhat inevitably even more people wondered if there was any point to it, and unfortunately this time around they were right to as it really doesn’t need to exist or do anything that the other films haven’t done in a far more interesting manner.

The plot sees Woody and co now owned by Andy’s little sister Bonnie, except that Bonnie doesn’t have much time for Woody (Tom Hanks) and he’s left in the closet time and again. After she creates her own toy, Forky (Tony Hale), on the first day of Kindergarten Woody becomes protective of him, especially as said toy is suicidal (Well, all but at least) and on a family road trip Forky throws himself out of the RV, leading Woody to have to save it. He manages to do so incredibly easily, but on the walk back to the families RV camp he discovers an antique’s store, and inside it is the long lost Bo Peep (Annie Potts).

This leads to lots of surprisingly bland action sequences as Woody tries to reconnect with Bo Peep and save Forky from the grips of the unwanted and unloved doll Gabby Gabby (Christina Hendricks) and her gang of creepy ventriloquist dolls, and everyone is separated and then reunited over and over again to the point that you wonder why they thought we’d be interested in seeing such a dull plot repeated time and again. It’s frustrating as there’s the odd funny moment and decent line but they’re few and far apart, and though there’s lots of scenes with the new characters the old ones are mostly ignored.

Problematically the new characters just aren’t that interesting, Forky’s a cute concept and has some amusing lines but everyone else is just weak. Gabby Gabby’s a boring villain, Bo Peep’s new friends fail to do anything that interesting (and she herself doesn’t get that many amusing lines either), and while the ventriloquist dolls are nicely disturbing they’re often just lurking in the background apart from during the big action sequences. The script is far too often treading water as well, repeating themes that were explored in the first three films in a much less involving way, with Woody’s constant concerns about his place in life failing to be that interesting (indeed he’s occasionally a little irritating), and the jokes, well, some work but the majority didn’t even seem to amuse the restless and often chatty young audience I was a part of.

Visually the series has never looked better but that’s just not enough, especially considering how greatly loved these characters are and how the film all but ignores many of them for long periods. Buzz has a lot less to do (possibly because Tim Allen is a twat these days, but that’s pure speculation) and the rest of them mostly get to say how worried or nervous they are about events but little more than that, at least until the end, and it’s frustrating given that the new characters fail to be engaging. In one scene in Toy Story 3 I was on the edge of tears but there’s nothing even close to that here, and in a good few places I was struggling to stifle a yawn.

The final twenty minutes does at least mostly deliver but it doesn’t make up for the absolute averageness that’s come before, and even though the ending suggests there won’t be a Toy Story 5 I wouldn’t be surprised if Disney think sod it, the films make a lot of money so who cares if he we have to come up with a contrived way to bring the gang back together. Either way the reviews will have to be pretty stunning to get me to see it as this is one of the worst Pixar films yet made, lacking in any kind of the innovation or inspiration that they’re able to create in their best work.