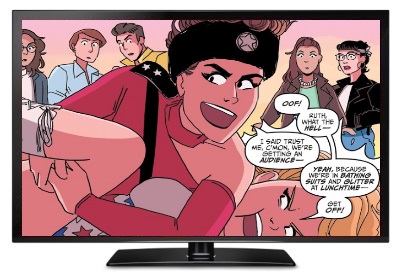 There are many tv shows which have had a comics spin off while on the air or after they’ve been cancelled, from the likes of Buffy to Doctor Who, Battlestar Galactica to Firefly, but most of them are sci-fi or fantasy genre pieces and it’s rare that either a comedy or drama has ended in comics form. There are exceptions of course, some mad man thought people would want to buy a Saved By The Bell comic back in the nineties, but they tend to be few and far apart so I was quite surprised when I saw that IDW Publishing had put out a comic based on the popular Netflix show GLOW.

If you’ve not seen the series it’s based on the Glamorous Ladies Of Wrestling, a tv series made in the eighties which showcased a selection of talented women and their wrestling abilities, though most of it is actually about what goes on behind the scenes and the relationships they have with each other and their mostly okay but occasionally shitty bosses Sam and Bash. Starring Allison Brie, Betty Gilpin, Sydelle Noel, Britney Young and Marc Maron it’s been an enjoyable affair, it’s not the most innovative of shows but the characters have depth and it’s smartly written.

The comic it’s based on isn’t the disaster that I thought it might be too. The story line is a fairly involving one where the women are overjoyed at the prospect of an entire weekend off for the first time in an age and start planning what they want to do, only for Sam to quash their plans as he’s booked them in to perform at a wrestling convention. Once they arrive they discover that there’s another female wrestling team who they have to work with, and said wrestlers aren’t impressed by the GLOW stars, considering them not to be real wrestlers in the slightest.

Written by Tini Howard with art by Hannah Templer, the art is a bit too simplistic and cartoonish for my tastes though at least you can recognise all of the individual characters which doesn’t always apply with comics’ adaptations (*glares at some of the artists who have taken on Buffy over the years*). Of course this kind of thing wouldn’t suit anything too realistic and artists like Simon Bisley or Rob Liefield might have sucked the fun out of it, but someone like Adam Hughes or Kevin Maguire who have a real knack for capturing quirky facial expressions would have been better. As it is it’s not the end of the world though and Templer captures the physicality of the wrestling effectively at least.

On the writing side of things I’ve less complaints and Tini Howard does a decent job at capturing the individual characteristics of the cast. So Ruth is as optimistic and perky as ever, Betty’s slightly reluctant but always ready to up her game, while Carmen is excitable but then has concerns as to how her family might react to her performing at a real wrestling convention rather than on tv. Her portrayal of Sam is strong too, he’s still curmudgeonly but shows occasionally glimpses of kindness, and when it comes to Sheila, well, she’s still slightly odd but without it ever feeling cliched or lazy. Out of the rest only Cherry gets a raw deal and is used for cheap laughs, but as she’s kind of out of it on painkillers after a dental procedure I’ll let it slide just this once.

There’s a good few amusing moments during these two issues, from Ruth and Betty’s play fighting in character to raise money for the journey to Rhonda’s desperate attempts to win a quiz, and Melanie’s attempted seduction of a British wrestler raised a smile, even if the latter character’s dialogue is a pretty cliched version of how the English speak. But on the downside it’s an extremely flimsy read, there’s none of the slightly more complex elements of the tv series in the comic, Ruth and Betty’s relationship isn’t explored in anywhere close to the depth of the show and bar Carmen’s subplot there isn’t a dramatic edge to it at all, which is a shame as that’s one of the best parts of the tv series.

I’d be surprised if it appealed to anyone who hasn’t watched the tv show and unsurprisingly sales figures for the first issue weren’t that high (it was the 192nd best selling comic for March, which obviously isn’t good) so I don’t know how long it will continue for. And even fans of the series might go away disappointed, at least if they’re looking for something which really replicates how good the show is, but if you’re in the mood for something fun and breezy featuring characters that you’re fond of, that could have been a real mess but which at least manages to successfully capture some of the feel of the tv show, then it’s something you might want to check out at least once.