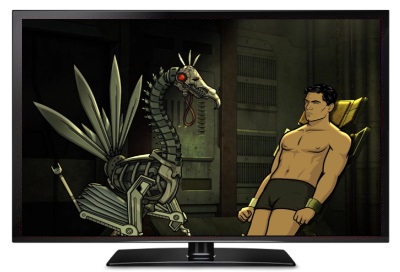 Archer Season 10 Episode 2
I had a few misgivings about the first episode of Archer but was hoping that as it was establishing this year’s set up it might have concentrated on being plot heavy and the rest of the season would be better, though even the normally reliable ongoing bantering between the gang was a bit repetitive and nothing we hadn’t seen before. But at the end we saw Archer and co captured by a now fully robotic Barry and I hoped that storyline would be a bit more fun, and it was, pleasingly, it wasn’t the best ever episode but the psychotic torture monster Funbeak had some great moments with Archer, and became ever funnier when possessed by Mallory and she began electrocuting his penis. While that was going on the rest of the gang were involved in a Gladiator-esque fighting scene akin to that from Thor: Ragnarok which saw them finally kick each other’s arses, which was a lot more enjoyable than the usual bickering, and I’m sure every single viewer enjoyed seeing Cyril finally being crushed against walls and having his back all but broken. Plus there was an ongoing joke about the smell of Pam’s boner (er, you kind of had to be there), Krieger moaning about losing his robot milk (which isn’t the sexual innuendo it sounds like) and Ray happily devouring cake on the ship unaware of the violence taking place outside of it, all of which made it an extremely likeable episode. I’ve no idea where the series will go next, there’s certainly nothing in the final minutes which give anyway away on that front, but as long as it’s as inventive as this episode was it should be the best of the coma-era episodes by far.

The Jellies Season 2 Episode 1
I watch a good few Adult Swims and enjoy them a lot, but somehow The Jellies had passed me by until the series recently returned to the air. In the hope that it might be something of a gem I caught a few from the first season but wasn’t impressed, but thought I should give it one last shot as it might have improved in it’s second year. Unfortunately it didn’t work for me once again, it’s by no means bad but it just doesn’t do anything that interesting or original, it’s another family sitcom, with a depressed daughter, an over enthusiastic wife, a chirpy adopted son and a father who seems a bit moody and though there’s lots of swearing and violence – something I usually enjoy a lot – it was often quite bland and boring. The odd joke works, and the adopted kid’s naivety led to the occasional smile, but most of the time I was hoping it’d do something that would be amusing and then was let down, so unless I hear that it suddenly improves I won’t be giving it another go.

Mom Season 1 Episodes 1 & 2
The Summer Tv Drought is upon us again with many a regular show now finished so I thought I’d revisit some old sitcoms that I like but haven’t ever rewatched, and started with this. I’d forgotten quite how edgy it could be too, the characters in the current series have the odd conflict or difficult situation arise but they were a real mess at the beginning. Christy and Bonnie barely have any kind of a relationship in the opening episode and though they become closer by the end of it it’s still a very fractured connection, and Christy’s clearly still struggling with not drinking and hating much of her life in general. The jokes are a little more adult too, there’s a great one where Bonnie talks about a guy she slept with who “Cries when he finishes”, and she also keeps on going on about a gynaecologist with tiny hands, while Chef Rudy has a fun quip about cocaine and Christy realises she’s failed her daughter when she remembers she never told her that oral sex would be a good way to avoid getting pregnant. Another big difference is that Christy’s kids are a large part of the show, they’ve kind of been forgotten about now but here the plotlines revolve around them in a major way, and for once it’s a sitcom where children aren’t annoying, so it’s a shame they no longer appear in the series bar the occasional cameo (with the son Roscoe not even getting that, and it is a bit odd that he’s never mentioned these days and I’d love to know why he’s basically been edited out of Christy’s life). The most recent season was still great, especially for a mainstream network comedy, but it’s a little disappointing it’s become quite so cosy and mostly predictable these days.

Bye Bye Birdie
This is a charming and fun romcom musical based around an Elvis-esque singer being drafted who thanks to Dick Van Dyke and Janet Leigh is set to make one last performance on the Ed Sullivan Show where he’ll kiss a lucky fan. But complications ensue when said girl’s boyfriend gets jealous while Van Dyke’s mother messes up his relationship with Leigh, and then the Moscow Ballet pop up and almost screw up the everyone’s lives completely. There’s a bit of filler around the hour point which stops it from being an all time classic but it’s bloody great most of the time, the songs are a blast and it has a gorgeously daft ending and is something pretty damn special in general.

Video Of The Week
When they first started out I used to be really fond of panel shows, indeed I was once in the audience for a recording of Have I Got News For You way back in 1995 when Bob Mills and Alexander Salmond guested, and had a ball of a time, especially as much was cut for legal reasons when it finally aired. Back in the 90’s and early 2000’s there was a whole host of other fantastic series as well including Never Mind The Buzzcocks and Shooting Stars, hell, even They Think It’s All Over was once vaguely bearable. But in the last decade or so they’ve become lazy and tiresome guff, with only Would I Lie To You worth watching (though just for the record I don’t consider Taskmaster to be a panel show, but I know some do), and in this sketch from Harry & Paul’s “Story Of The Twos” they satirise the genre beautifully, and show just why they’re so tedious to watch these days. https://www.youtube.com/watch?v=-2z-AdzgKjY

Link of The Week
Doom Patrol was one of the best new shows of this year and an absolute delight, sure it’s not a straight comedy but it had a fantastically warped sense of humour and made me laugh far more than many a sitcom. This week the AV Club published an article comparing it to the work of the much loved sitcom auteur Norman Lear, I’m not convinced by all of the arguments made but it is definitely a really great read for those who love the show, and if you’ve not seen it yet hopefully it’ll persuade you to do so.
https://tv.avclub.com/the-wildest-thing-about-doom-patrol-is-how-it-carries-o-1835074002