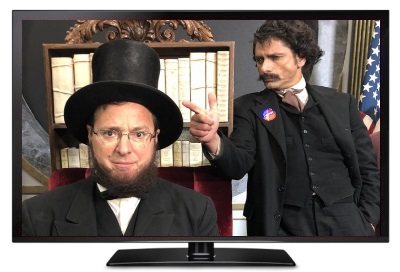 Rostered On Season 1 Episode 1
This Australian workplace comedy originally aired on youtube and Facebook before being picked up by Netflix, with a second series currently being made. Perhaps it gets better but judging it by the first episode it’s very doubtful that I’ll ever see it as it’s quite the mundane and dull piece. Shot from the point of view of the constantly annoyed shop assistant Shaun (Paul Moore), he works in an electronics store and seems to hate every single second of it, partially because of those he works with and partially due to the customers who make his life a misery. There’s lots of fourth wall breaking as he delivers monologues to the camera explaining why the people he works with are so awful, and we also get to see a rude and irritating customer trying to return a camera despite nothing being wrong with it and her not having the box or receipt. It’s competently shot and acted but it’s just not funny, you can understand why Shaun is so miserable but rather than laughing at his discomfort you’ll just find yourself irritated by the shit he has to put up with. Perhaps it improves but this first episode was so weak that it’s a rare situation where I just can’t put myself through another twenty odd minutes of potential misery.

Historical Roasts Season 1 Episode 1
Comedy roasts are popular, as is the series Drunk History, and if you sort of combine the two of them then you get this new Netflix show where comedians and actors take on the roles of well known historical figures and insult each other. Hosted by Jeff Ross, who’s made a career out of doing roasts, this first episode sees Abraham Lincoln (Bob Saget) roasted by the likes of Ross (playing a civil war soldier), John Wilkes Booth (Saget’s Full House co-star John Stamos), Harriet Tubman (Yamaneika Saunders) and Mary Todd Lincoln (Natasha Leggero) among others. I wasn’t sure I was going to like it as Lincoln’s not exactly the most exciting historical figure ever but it was fairly funny and decent enough to make me want to check out the rest of the series, given that it starred Stamos and Saget there were some amusing Full House related jokes but most of the time it stayed in the past and mocked how long it took Lincoln to free the slaves, his assassination by Wilkes Booth, and and Natasha Leggero had the best material as she insinuated that Lincoln was bisexual at the very least. To be honest it would have been a shocker if it hadn’t been amusing given that the episode had fifteen writers, which is a hell of a lot even for a US comedy, but hey, the main thing is that it made me laugh and hopefully the other episodes will do too.

American Dad – Season 15
Despite giving the first new episode of American Dad a positive review in Comedy Snippets a few months ago I’m thinking about giving it up. It’s not that it’s become bleakly horrible in the way that Family Guy has, it’s just not that interesting or amusing any more and many an episode just seems to be going through the motions. There’s still been the odd decent one during this most recent run, with the episode where Steve goes to boarding school being worth watching, but too many follow the formula of Stan doing something annoying and upsettin a family member, or Roger getting up to some crazy adventure without a care in the world as to who it affects. Maybe I’m just jaded or asking too much from the series given that we’re now fifteen seasons in, but it managed to be much more playful and funnier last season and the gag rate has definitely declined.

The Phantom of the Paradise
An early effort from Brian DePalma it’s a ridiculously silly but incredibly entertaining musical which mixes Faust and The Phantom of the Opera together with aplomb, and visually there’s lots of stand out scenes that will remain in your memory for a long old time. I mean technically is a bloody strange piece and I could completely understand why some people might hate it, the songs are outrageously over the top and the performances camp and ludicrous, so it’s impossible to enjoy unless you like the most bizarre efforts that cinema has to offer, but fortunately I do and if the same applies with you then it’ll be a movie you love.

Video Of The Week
Nathan Fielder is a comedy genius and there are only seven of those currently alive, his series Nathan For You is astonishing, and the subject of a forthcoming classic comedy article I’m half way through writing right now. But before he made that series, and his appearances on Jon Benjamin Has A Van, he used to put up daft sketches on youtube, and this clip from a supposed episode of Top Chef is childish, for sure, but also very funny, the ending especially. https://www.youtube.com/watch?v=CuBO-32jK2A