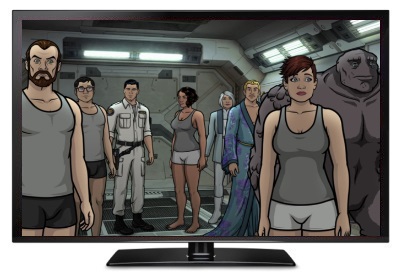 So Archer’s finally returned for what may well be it’s final season, or at the very least the last one that show creator Adam Reed is going to be involved in, but is there really any need for another outing for this bunch of reprobates who were once rather crazy spies who tended to get in to all manner of insane hijinks but also spent most of their time arguing with each other? I’m not too sure to be honest, Archer used to be a show that I loved but ever since Archer was shot at the end of season seven we’ve been presented with the show in a variety of Archer’s coma dreams and it’s not been as good.

Not that Dreamland and Danger Island didn’t have some highlights, with the change of setting initially reinvigorating the series during the former, but the latter seemed a little lazy, with a lot of usage of catchphrases and a huge amount of bickering that felt like Reed and the writers were running on autopilot. Some episodes were still great but as a whole it slightly disappointed, and though this latest season is set in space and finally sees the gang reunited as a team again, with it looking absolutely beautiful, it’s yet more of the same with way too much bantering and not enough plot.

It’s frustrating as certain elements are engaging, having Pam as a big The Thing like alien and Cheryl (now renamed Carol for some unknown reason) being less insane and more kick arse are both nice ideas, while Ray as a space prostitute akin to Inara in Firefly has one great joke at the end, and Malory’s role as the ship’s AI / Hologram sees her mostly being dryer than ever. But the story is fairly by the numbers as Archer and co are messing about in space before they take on a stowaway (Bort the Garj, voiced by Detroiters’ Sam Richardson) and end up being captured by a now fully robotic Barry, and instead of anything that interesting going on it’s Archer insulting the others and Lana and Cyril getting annoyed with him. It also massively underuses Pam, who over the past five seasons has been the show’s most valuable player, Krieger doesn’t get that much to do as a synthetic human and is far less evil / kinky than usual, while bar the odd joke Ray is very much a background character as well. The dialogue has some amusing moments but by and large it’s predictable and ten seasons in we’ve not only seen it all before, but many times over, and anyone hoping that the show is going to do anything that innovative or original with it’s new setting is going to be sorely disappointed.

It still had some funny moments, Adam Reed is a talented man after all, and Cyril hiding in the storage lockers instead of hunting the alien and Lana asking Bort how he knows English and the response to this amused (as it’s something that it is all too often ignored in sci-fi shows), as did Archer’s excitement at going in to hyperspace and Cyril shooting randomly at nothing during the big space battle. But all too often it was the same old Archer, with the not so gentle ribbing between the team members failing to generate any laughter, and the characters feel duller than they once were. There’s still seven episodes to go and perhaps this was just a slow beginning to what will be a great season, it’s a series I have an enormous amount of affection for so I will undoubtedly stick it out until the end, but I wish I could be more optimistic that by the time the curtain falls I’ll find myself hoping that this won’t be the last we’ll see of them all, because right now that’s certainly not the case.