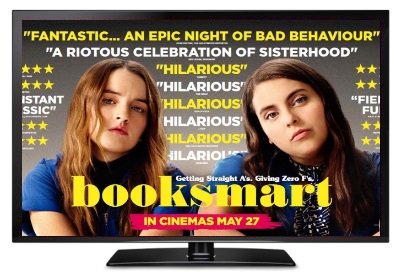 This latest US teen comedy has been receiving rave reviews across the board and for once it’s a case of a mainstream film deserving them. Directed by Olivia Wilde it’s a fast, breezy affair with a warm tone and smart dialogue that feels real, these are two friends whose friendship comes across as genuine and the two performances from Beanie Feldstein and Kaitlyn Dever are affecting stuff, not quite good enough to win major awards but still certainly deserving of acclaim.

Another “One Crazy Night” style comedy this sees friends Amy (Dever) and Molly (Feldstein) become aware of the fact that while they spent their entire high school years studying hard to make sure they’ll get in to a top university, their classmates have managed to party and yet are still doing incredibly well for themselves, so they decide to make up for their lack of drunken hijinks the night before graduation by attending the big class party and hopefully getting together with the people they fancy. Of course nothing goes to plan and hijinks ensue, but they’re the realistic, plausible kind of adventures teenagers may have rather than anything too surreal or ridiculous, and the film is all the better for this.

The film works so well because Amy and Molly are so well defined and drawn characters, both incredibly smart but not in a The Big Bang Theory cliched kind of way, and both are charming in their own ways too. The supporting cast are also strong, including schoolmate Jared (Santa Clarita Diet’s Skyler Gisondo) as a geeky sad type who everyone suspects lost his virginity to a prostitute his rich father bought him on his fourteenth birthday, wild child Gigi (Billie Lourd, who’s amazing in the role), and the two people Amy and Molly fancy, Nick (Mason Gooding) and Ryan (Victoria Ruesga), have hidden depths and aren’t the kind of two dimensional sorts you normally get in a film like this.

It makes good use of it’s adult cast as well, which includes Will Forte, Jason Sudekis, Lisa Kudrow and Mike O’Brien, the latter being the best of them all and whose character has a superb pay off. It’s also a playfully directed piece, with a cute claymation sequence after the girls accidentally take psychedelic drugs especially fun, and most importantly it’s consistently funny from start to finish. If there’s a downside it’s that towards the end it becomes a bit predictable, there’s the inevitable scene where the duo have a big argument and fall out, and the ending won’t exactly shock you, but as a whole it’s an impressively well written and performed piece.

Unfortunately it’s not done that well at the box office which is fairly frustrating as it’s so much better than similar-ish films like American Pie and Superbad, for once it’s a teen comedy that doesn’t rely on gross out humour too much of the time, there’s some minor vomiting but it’s not played for laughs for a change, and otherwise the humour is generated from some impressively constructed scenarios and enjoyable dialogue. For a debut film this is extremely engaging material, which suggests that Wilde will have a great career not only in front of the camera but behind it too.