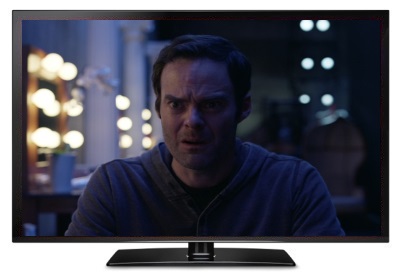 Barry Season 2 Episode 8
There’s been something a little off about this season of Barry, there’s been certain episodes which have been fantastically strong but as a whole it’s slightly disappointed. The writing was so tight in the first season but here it’s been a mixed bag, the dialogue’s mostly still been as good as ever but the plotting has been all over the place, and the characterisation misguided and misjudged at times. Unfortunately that applied to the series finale too with the cops carrying out yet another terribly flawed investigation which hinged on the fact that Stephen Root’s Fuches made a confession over the phone despite not sounding much like Henry Winkler’s Gene, and which could instantly have been proven false by the use of a forensic audiologist. Meanwhile Fuches is clearly suffering from his injury from episode 5 despite Barry not doing so when his was far, far worse, what with his having been stabbed repeatedly and his wound then poorly stitched up and then finally superglued together seemingly not bothering him in the slightest. Some of the scenes were a little too on the nose as well, like Sally obsessing over the idea that “Telling the truth is the right thing to do” just as it conveniently mirrored Barry’s current predicament, I’ve no problem with them using this technique but it was done in such a heavy handed manner that it made me cringe. It’s frustrating because there are still elements that are entertaining, the clips we saw of the various performance pieces at the theatre were sublime with the cringeworthy “Four-Gotten” monologue being beautifully painful, there was a great joke about Fuches giving a big monologue but the recipients of it not being able to hear him, and Noho Hank kills it with every line he’s given. Despite all of my issues with it I am looking forward to the (hopefully final) third season, but it needs to be better written and more consistently thought out if it’s to regain the heights of the first season.

Urban Myths Series 3 Episode 3
Due to it airing on Sky Arts I’d not seen Urban Myths before but after hiding in someone’s bushes and watching it through their window (or visiting a friend, it’s one or the other), I finally have and I was pretty impressed by it. Each episode tackles a different urban myth, as you probably guessed and are quite angry at me for pointing out, and this one, entitled “Bleak House Guest”, was about the time Danish author Hans Christian Andersen (Ian Hart) visited Charles Dickens (Stephen Mangan) and they fell out with no one quite knowing why. The show guesses it was due to the fact that Andersen was a right old weirdo, with enough known about the man for it to be quite the possibility, and so they play around with how he might have behaved during the episode. It’s a fun old ride too as Andersen’s awkward behaviour frustrates Dickens and his wife Catherine, as he cares not for social niceties and moans about the accommodation given to him, wanders around the house naked, and demands that he watch Dickens write as he’s so enamoured with the author. Hart’s performance is excellent (with my Danish girlfriend impressed by his accent) and though Mangan is exactly the same here as he is in everything, and not like any portrayal of Dickens I’ve seen elsewhere, he’s still very likeable. There’s also some commentary on Dickens’ marriage as the couple divorced the year after, and though at times it veers in to comedy drama territory it’s still pretty damn funny throughout. My only complaint it that I wish a better actor had been cast as Dickens, but overall this is an impressive piece that I liked an awful lot.

Goatface
I’ve been meaning to watch this since it aired last November but never found quite the right time, which I now regret it as it’s one of the best comedy specials that has aired so far on Netflix. Starring Patriot Act’s Hasan Minhaj and also Fahim Anwar, Asif Ali and Aristotle Athiras it’s a mixture of sketches and stand up many of which draw on their experiences on what it’s like to be an Indian Americans. The stand up sequences are relatively short as all four individually do a routine inbetween various sketches, and it’s these which are the weakest part of the special, not because they failed to make me laugh but a couple covered hackneyed subjects like the fact that it’s amazing that women can go through childbirth, it’s undoubtedly true but it’s something that many stand up’s have talked about in the past. The sketches were nearly all fantastic though, the best of which were surreal and / or unpredictable, with the one about kids eating and loving a cereal which caused a silent weirdo to pop up in their house making me laugh the most, but there was also a darkly twisted but very amusing scene from “CSI: Molestation Unit”, a fake game show called Baba Knows Best and a celebration over the fact that a terrorist attack was committed by a white man that were all superb stuff. It appears right now to be a one off but I really hope Netflix do give them a series as I’d love to see more from them.

Shazam!
I didn’t have high hopes for this as even though the reviews were positive from the trailer it looked a tad broad, like a kids movie in the eighties what with it’s big central story being something of a body swap comedy, but as the credits rolled I found myself thinking that it was probably the best DC movie yet with only Wonder Woman coming close. It’s 20 minutes too long with a bit too much time spent on the emotional baggage side of things, but that seems to be standard for this sort of thing, and otherwise it’s all a bit of a blast. The comedy is strong (a homage to Big being the funniest moment, but Zachary Levi is a delight throughout), the other performances are great, despite being an origin tale it’s got an interesting story for once, and I’m very fond of it in general.

Video Of The Week
You may think you might know all about the Titanic if you’ve watched James Cameron’s film or seen any of the many, many other movies and tv shows and documentaries about it, plus there’s been the odd book about it too or so I’ve heard. But comedian Thomas Howarth brings a wealth of new facts and info about the sinking of that big old boat in this six part series which is gorgeously funny throughout. https://www.youtube.com/watch?v=IOnV7nlh1kY&list=PLn6-TwBDBLvYqDfV6U8xtKRoB5piFAsmy&index=3