One and Done: The IT Crowd (US) 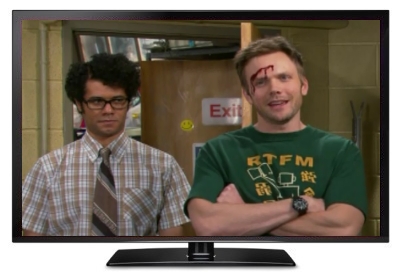 Graham Linehan used to be one of the best comedy writers around, co-creating Father Ted and Big Train and writing for Brasseye, The Fast Show and Black Books, but unfortunately he’s gone a bit mad now and writes offensive crap on Twitter that will hopefully see him never work again. Which sounds harsh, I know, but it really is pretty appalling stuff, plus his output in the last decade has been fairly poor as well so it wouldn’t be the worst thing in the world if he no longer was a part of this peak tv era.

The IT Crowd was one of the last semi-decent things he did, though it stole many an idea and gag from Seinfeld, and it started off really strongly before going off the boil in it’s fourth and final full series. And it had only been on the air for two years (and twelve episodes) before NBC started sniffing around and decided to make a pilot for American audiences, starring Community’s Joel McHale, Review With Forrest MacNeil’s Jessica St. Clair, NCIS actor Rocky Carroll and Richard Ayoade from the original UK version. It’s a very, very similar creation too, with the plot being identical and only a few of the jokes and references being changed. So in both we see an unqualified woman called Jen being given the job of the manager of the IT department, and employees Roy and Moss reacting poorly to such an occasion, at least until Jen shows that she does have a talent for handling people, something Roy and Moss are completely inept at, and very, very briefly manages to make the IT department popular, at least until it’s inevitably screwed up.

When it comes to casting Ayoade turns in an identical performance and so is very funny throughout, but while you might have have thought that Joel McHale would be perfect in the role that Chris O’Dowd made so popular he doesn’t quite have O’Dowd’s charm, which is surprising as he oozes it in pretty much everything else he does. He’s a bit too frantic, a bit too manic, and we never get to see the slightly more vulnerable side that O’Dowd pulled off so well, which is a fault of the script rather than McHale’s acting abilities. Katherine Parkinson makes for a better Jen too, she’s slightly quirkier, slightly odder, and she makes the character more sympathetic, there’s nothing wrong with St. Clair’s take on the role other than it’s played a bit too straight, and so the character is less appealing and when it all goes wrong for her at the end it’s hard to care.

The biggest difference is Rocky Carroll’s take on their boss Denholm. Admittedly he was always on a hiding to nothing taking on the role Chris Morris originally played, but as with the rest of the cast it’s not really his fault as the script makes him out to be smooth and cool rather than slightly weird. Chris Morris is the one comedy hero that I have so it was always unlikely I’d prefer Carroll’s version but whereas Morris is delightfully eccentric and makes even bland lines funny, Carroll’s just a bit nothing-y, likeable but nowt more than that. The opening interview with Jen is very similar but in the scene where Roy is about to tell him that Jen lied on her cv and knows sod all about computers after a very similar speech from both about how much he loves teams, Morris rambles on about The A-Team (he has a photo of them on his desk) even though he doesn’t know their names (beautifully calling Mr T “Mr Jewellery”) whereas this is missing with Carroll’s version of the character and the scene is made far less funny when we learn that he knew all along that they were lying to him and he admits to doing the whole team work conversation just to trick them.

That has a knock on effect in a following scene where Jen devises a plan to make Roy and Moss more popular while The A-Team theme plays over a montage of them working on it, in the UK version Denholm’s love for Hannibal and co makes it even funnier, whereas in the US it just feels like a cheap gag. Other disappointing differences include a bit where McHale’s Roy initially tries to impress Jen by going on about how he fought a wild animal, and Moss nursed it back to health, which is less amusing than O’Dowd’s attempt to sound intellectual by talking about Tolstory despite clearly having never read the man’s work, and some of Moss’s weirder moments aren’t present, like his obsession for wearing different glasses when it comes to the importance of discussing a plan they’re devising. These are minor changes admittedly, but the main thing is that in the original the show seems more assured, and the cast are more comfortable with the dialogue, whereas the US pilot moves at a faster pace and is poorer for it.

It’s an odd situation where The IT Crowd became a hit in the UK (well, for Channel 4 at least, the first episode only got 1.8 million viewers which was disappointing at the time but it was critically acclaimed and became a cult success, running for a whopping four series!) but we never got any further episodes of the American version despite it being so similar. Though for once it’s a slightly more complicated case as a series was commissioned and scripts produced, only for their to be a change in the regime at NBC and new chairman Ben Silverman decided against making it. A second pilot was produced by Scrubs creator Bill Lawrence a few years later but that hasn’t yet leaked so it’s hard to know if it was any better, and as recently as 2018 Graham Linehan was working on a third, but given that no further news has been announced I can only presume it’s not happening.

Going by the quality of this version of the show I think it could have been a minor hit, the cast are pretty decent, Richard Ayoade had the potential to be a break out star in the way Jim Parsons has been when it comes to The Big Bang Theory, and given the US system even if they reproduced all the scripts from the UK version at the time half way through the first season they’d have to had created all new ones, and it would have been interesting to see what direction they’d have taken the show in. It’s no tragedy for sure, and all of the cast have gone on to bigger and better things, but I’d definitely have liked to see more of it and if they’d slowed it down very slightly and played around with Carroll’s character a bit more it plausibly might even have turned out to be better than the original.