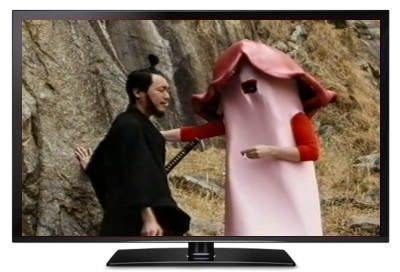 There’s been plenty of mockumentaries made over the years from the beloved This Is Spinal Tap to the horrendous An Alan Smithee Film: Burn Hollywood Burn, but I’ve never seen anything quite like this unique Australian film about a fictional Japanese television series called Ronin Suiri Tentai. Supposedly aired in Australia in the early 1990’s as Top Knot Detective it became a cult hit over there and in Japan, and this is the story of the show which is almost as insane as what they claim took place on screen.

Narrated by Des Mangan, the writer of the superbly daft Hercules Returns (where a group of friends end up being forced to dub over the awful Italian movie Samson and His Mighty Challenge), it features a lot of footage from the series which is a ridiculously over the top Samurai flick with acting which would embarrass The Room’s Tommy Wiseau. It’s the kind of series that features crazed ninjas, impossible gadgets, heads being punched off, giant robots, amazonian cannibal lesbians, things exploding for no good reason, stop motion sperm penetrating an ovary, death by magnifying glass and a hero who celebrates by singing karaoke, so in short, yes, it’s the kind of thing which you’ll find yourself wishing really did exist.

A mixture of pastiche and parody of Japanese samurai flicks and fantastical Asian series we’re presented with a supposed history of the show that contains plenty of behind the scenes revelations, from the fact that the writer, director and star of the piece Takashi Takamoto (Toshi Okuzaki) was a nightmare to work for, with his stunt work often putting the cast in danger, while his jealousy of everyone else’s acting abilities pissed off various cast members no end. It’s not just a parody of OTT action shows and egotistical showrunners though, the talking heads themselves are deliberately funny as they wryly comment upon events, the narration is occasionally mocking, and directors (and writers) Aaron McCann and Dominic Pearce have a lot of fun sending up footage of audition tapes, old tv interviews, a brilliant fake cigarette advert with an audio recording akin to the famous Orson Welles frozen peas outtake where Takeshi gets pissed off when doing an advert for whale meat at the studio’s bequest.

It’s a film where the dialogue often shines, with Takeshi described at one point as “Think Errol Flynn with not nearly as many STDs and far less talent”, there’s footage from the fake show where a villain exclaims “I will wipe you from history like a bowel movement”, while a scene where a baby and it’s umbilical cord is used as a weapon has to be seen to be believed. There is a slightly darker edge to it towards the end as well which adds depth as we learn why Takeshi wasn’t one of the talking heads involved in the film, and there’s also some sober commentary about how actresses were treated in Japan back in the nineties which I truly hope has changed now.

I’ve seen a fair few documentaries about insanely silly action films (Machete Maidens and Electric Boogaloo: The Wild, Untold Story of Cannon Films being the best) as well as absurdly violent and extreme Asian movies, and this captures the spirit of the craziest examples perfectly. It’s beautifully constructed, the acting is perfect throughout, and it’s a film I have no doubt will become the kind of much loved cult classic which gets late night showings at independent cinemas packed full of devoted fans.