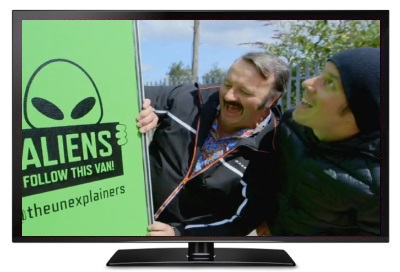 The Unexplainers
Originally this show started on the radio and I knew nothing about it, indeed when I saw the title I thought it might be a spoof of The X-Files or something like that, but no, it’s not even as interesting as that. Perhaps I’m being unfair as I’ve only seen the first episode so far but it basically sees two comedians investigate a supposed mystery, with them looking in to big cats seen in the wild and the beast of a big lake in Wales in the opening show and it’s dull stuff indeed. They interview people who claim to have seen the animals, make stupid comments, and come up with an idiotic plan as to how see the creatures and it’s actually quite surprising as to how unfunny and irritating it is, even watching one 29 minute episode was an incredible struggle. Oh well, there’s a ridiculous amount of great tv on right now so at least that’s one less show to watch.

The Tick Season 2 Episodes 2 – 5
The Tick has got glowing reviews across the board for it’s second season, indeed I gave one myself for it’s first episode, but the following four haven’t really clicked with me. It’s still a show that I find interesting and fun, but it just isn’t making me laugh that much. A bottle episode set on Dangerboat dragged a little, and the various storylines haven’t contained that much mirthful material. I’m hoping the second half of the season will be better as I’m extremely fond of all of the cast, and the source material, and the first season was impressive throughout so with any luck the final five episodes will deliver.

Little Miss Sunshine – A Road Musical
I sometimes moonlight as a theatre critic, and this week got to see a musical version of the hit 2006 indie comedy starring Toni Collette, Greg Kinnear, Paul Dano and Steve Carrell. First produced in the US off broadway in 2011, this is it’s UK debut, with much loved former tv star Gary Wilmot in one of the roles. It only ran for a couple of months in America so I had doubts as to whether it would be any good, but it’s actually really enjoyable, a nuanced and quite subtle exploration of marital issues, death, suicidal impluses and ambition. For anyone interested, the full review can be read here: https://viewfromthecheapseat.com/2019/04/10/little-miss-sunshine-a-road-musical-arcola-theatre/

2019 Funny Women Awards
The leading showcase for British female comedy talent, the Funny Women Awards are launching their annual search for the next household names. Now in their 16th year, previous winners and finalists of the Funny Women Awards include Katherine Ryan, Zoe Lyons, Jayde Adams, Desiree Burch, Harriet Braine, Sara Pascoe, Sarah Millican, Susan Calman, Rachel Parris, Bridget Christie, Kerry Goldliman and Roisin Conaty, with Thanyia Moore as the current title holder. The 2019 competition to find the next female comedy icons launches today, April 8th. Once again Funny Women will look to empower women in comedy across performance (Stage Award), writing (Writing Award) and filmmaking (Comedy Shorts Award). There is also an award for Best Show based on nominations from the public. Everything that aspiring entrants need to know can be found at www.funnywomenawards.com, including details of an innovative new way of entering the Stage Award. This year, Funny Women is inviting female comedians to submit a five-minute YouTube clip of a stand up performance by 30th April before potentially being selected to perform their set at one of our live heats across the UK. Across May and June, the heats will visit London, Coventry, Bristol, Brighton, Manchester, Canterbury, Ipswich, Edinburgh and Dublin. Regional finals will take place in July and August and the final in September in London – dates to be announced. In addition to the Stage Award result, the winners of the Comedy Writing Award, the Comedy Shorts (film) Award and the Best Show Award (for full-length shows during 2019) will be announced on the night of the final.

Popstar – Never Stop Popping
This trended on twitter this week after a deleted scene was posted and I hope it leads to a lot more people checking it out as it flopped upon release but is one of the best comedy films of recent years. Admittedly I have a weakness for musical comedy, and like Samberg a lot, but I think it’s a pleasingly silly and daft affair, and if one joke doesn’t work the next couple tend to do so. Most of the songs are strong and pretty damn funny, with the Bin Laden one especially having some really great verses, a few of which are almost as good as a Chris Morris parody, which is a huge compliment. There are some faults, and it has an over reliance on celebrity cameos, but overall I think it’s a extremely endearing movie.

Video Of The Week
Jon Glaser recently released some early short films and sketches from 2006 (and one from 2013), and, well, it’s Jon Glaser so of course they’re bloody great, and you’d be insane if you don’t watch them right now. In fact if you don’t I’ll track you down and section you myself, I have that much spare time on my hands, so don’t say you weren’t warned. For the record the ones which feature Dave “Tiny Hands” Gordon are my favourites, but they’re all fantastic in general, and Glaser has promised more videos will be uploaded soon so it’s a channel you’ll want to keep an eye on. https://vimeo.com/jonglaser