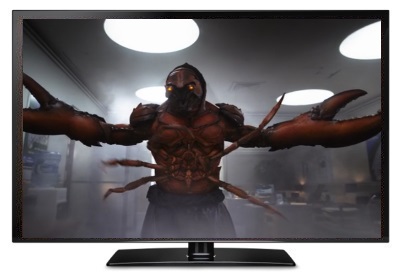 Peter Serafinowicz has been amazing for a long old time now, I’ve been a fan ever since How Do You Want Me?, the Dylan Moran and Charlotte Coleman sitcom made for the BBC back in the nineties. Since then he’s appeared in a sod load of different shows and films, and never failed to make me laugh hard every time, and his short lived The Peter Serafinowicz Show is still greatly missed to this day, the fact that the BBC didn’t commission a second series (and a third, fourth and fifth) is something I’ll never understand.

Fortunately he’s now finally got a bona fide hit on his hands, in the form of Ben Edlund’s superhero parody The Tick where he plays the melodramatic lead perfectly. This is the third version of the show after a short lived live action series was made in 2001 with Patrick Warburton in the lead role, while an animated series ran for three seasons from 1994 – 1997. Both have a lot to like about them, and Warburton unsurprisingly made for a great Tick, but this new Amazon series is the best version yet as it’s a little maturer and less cartoon-y than either of the other two series, merging real life with the craziness of superhero antics with aplomb.

It’s still a bright and brash show though, as The Tick’s become part of Arthur (Griffin Newman) and his sister Dot’s life and turned it upside down before spinning it around seven hundred and twenty degrees for several weeks on end. The finale to the first season finally saw The Terror, the man responsible for the death of Arthur’s father, arrested and it looks like life would return to normal, albeit whatever form of normal includes Arthur owning a moth suit that lets him fly. The course of true superhero-ing never runs smooth though as Arthur is let go by the company he works for as they just don’t have the insurance to cover the insanity his being a superhero causes, and so both he and The Tick are pretty broke, and a little uncertain as to what will happen next, especially as The Tick is currently moulting and they have no nemesis on hand to fight against.

Due to the nature of series like this that scenario only lasts about fifteen minutes however as while at a bank a robbery takes place in front of them, and a lobster / crab type villain is the leader of the group. After he makes his escape The Tick and Arthur return home only to be recruited by Aegis agent Ty Rathbone (Marc Kudisch) to be part of the new The Flag Five superhero team so it looks like life is looking up for the boys, however I’m sure that won’t last. And while all this is going on Dot (Valorie Curry) may be developing psychic powers, violent vigilante Overkill (Scott Speiser) is struggling with the fact that he’s promised not to kill, and The Terror’s former partner is still on the loose.

So yeah, this first episode had a lot to cover and it is slightly plot heavy, establishing all of the main storylines and themes for the show’s second season. Fortunately it hasn’t forgotten how to be funny with The Tick’s clueless yet infectious enthusiasm for everything in life generating a lot of laughs, as does Arthur’s unique brand of cautious superhero-ing, and Overkill’s frustration at not being able to spill blood is beautifully funny too. Plus there’s the fact that Overkill’s sentient vehicle Dangerboat (Alan Tudyk, seemingly everywhere right now, which I’m certainly not complaining about) has a crush on Arthur, which is something I’m pretty sure will never stop being amusing. Especially if they do somehow get together, which I’m hoping they will.

Over the course of the first season the show built up a great supporting cast and it continues to use them effectively in this first episode of the new season. I do slightly miss The Terror’s dry bastardry but I imagine it won’t be long before he’s back on the scene, and even if that doesn’t happen this year there’s so much going on I’ve no doubt it’ll continue to be a very funny, very smart, and very enjoyable comedy with sublime performances from all involved, and the kind of show that you can’t help but binge as you want to see how life turns out for these extremely lovable characters.