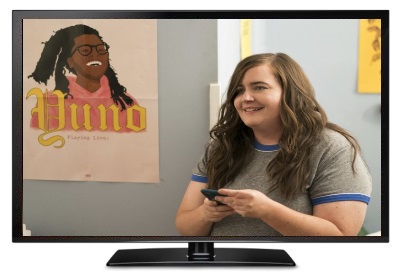 Shrill Season 1 Episode 1
A new Hulu show starring Aidy Bryant and Lolly Adefope, it’s based on a book by Lindy West who details what it’s like to be a plus sized woman who initially lets everyone walk all over her until she decides not to let them anymore. So from the get go you can’t wait until she steps up and tells the world to fuck off and when after getting pregnant and having an abortion she does it’s surprisingly sweet, funny and extremely likeable stuff. Bryant is fantastic as the lead, Lolly Adefope finally has a role which gives her the chance to show off what a great actress she is (as good as she is in This Time With Alan Partridge and Miracle Workers they haven’t given her much of a chance to flex her acting muscles just yet) and Daniel Stern is also strong as her father who’s going through chemotherapy. I’m not sure where the next five episodes are going to take us, but I’m definitely looking forward to finding out.

A.P. Bio Season 2 Episode 2
I really want to like this show, Glenn Howerton is amazing in It’s Always Sunny and Patton Oswalt is, well, he’s Patton Oswalt and who doesn’t love the man? But this doesn’t quite work for me, the first season was all over the place and it never made any sense as to why the students (some of whom look like they’re in their early thirties) went along with his various scams and schemes when it was screwing up their lives, and his revenge obsession wasn’t that interesting. I was hoping the second season might have addressed such issues and though it’s no longer got the season long arc now it’s about him seeking revenge against different people each week. The second episode was all about his hatred of the church (mainly because his mother left money to them in her will, but also due to thirteen years of Sunday school and I can certainly identify with the latter) and his plans to steal a statue of the virgin mary they built with the money. There’s also a subplot about him teaching driver’s ed, and another teacher worrying that a friend’s going to kill her husband, and though there’s the odd amusing moment (like when Howerton sees a bunch of nuns seemingly floating past his classroom), nothing made me laugh out loud and it’s frustrating that the last season of It’s Always Sunny wasn’t as good as it usually is because Howerton buggered off to make this instead.

Comic Relief – One Red Nose Day And A Wedding
I’ve always been fond of Hugh Grant, ever since Roman Polanski’s technically terrible but also ridiculously enjoyable film Bitter Moon, and have always thought he’s a much better actor than most gave him credit for. Thankfully he’s having his time in the sun right now having turned in amazing performances in Paddington 2 and A Very British Scandal so it’s a bit of a disappointment to see him back in a fairly two dimensional role. Despite that he’s still the best thing about this, as bar his performance nearly all of it was painful to watch, a lot of the supposed humour at the start was all about Rowan Atkinson’s shit vicar bumbling about and saying the wrong thing while marrying two women which was as predictable and as rubbish as you might imagine it might be, and there was also an awful joke where Grant mistakes the words of Ed Sheeran for W.H. Auden and lots of brief cameos from other members of the original cast that felt forced and unfunny. Richard Curtis used to be a great writer, and his episode of Doctor Who was one of the best of the new series, but he seems to have gone all shite recently and I hope he stops making these mini-sequels as they never live up to the originals, or even come close for that matter.

PK
PK is a superb Bollywood sci-fi rom com which also works as a smart and funny satire of organised religion. In it an innocent and naive alien is trapped on Earth and eventually ends up meeting a sympathetic tv producer, and his character is used to explore the absurdities of life, especially organised religion or those who profit from it at the very least. The songs are strong (though “Love is a Waste Of Time” is the only stand out) and whilst it’s a little overly sentimental in places it completely won me over by the end. Initially I thought that at two and a half hours it might be overlong, but it turned out to be one of those films I didn’t want to end, I could happily spend the rest of my life in this universe.

Youtube Video Of The Week
A part of Paul F. Tompkins’ Varietopia podcast, “Prankyankprank” sees Paul interview Michael Sheen and pitch him a movie where Sheen could play a sexy Loch Ness Monster fighting with a sexy Bigfoot, asking him if he’ll make the film at the end. Tompkins is on top form here, Sheen’s also entertaining (a line about Frost/Nixon action figures being particularly inspired), and it’s eleven minutes which made me laugh a lot. https://www.youtube.com/watch?v=j0p5D0_CLEo