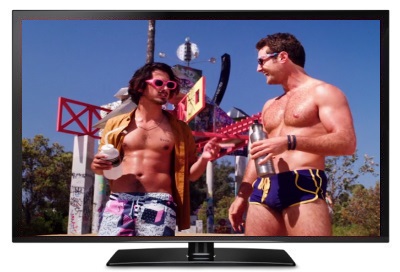 I’m extremely fond of the film making of Gregg Araki, it’s big and brash even if the budgets are often low, and also playful and crazy and fucked up but also beautifully funny. Both Kaboom! and Nowhere have mixed the craziness of life with a fantastical element and they’re crazily lovable flicks, and for me the only misstep he’s made was with The Doom Generation as it felt a little flat, but your mileage may vary. He’s also made the daft stoner comedy Smiley Face (which features a fantastic performance from Anna Faris) and the serious and bleak drama White Bird In A Blizzard, so he’s clearly capable of a wide variety of fare.

Now Apocalypse is like his more extreme comedies though, with lots of beautiful people struggling with life and saying a mixture of smart insightful lines and pretentious nonsense, all the while having a huge amount of sex. Co-created and co-written by Vogue sex columnist Karley Sciortino, both of them are aware of the ridiculousness of it all though and play around with the irony of their character’s situations, as they live hedonistic lives but are really looking to make a connection with someone. Or at least that applies to most of them, there’s always a few who just wander through life somewhat vapidly with everything working out for them (the bastards!).

The main character in amongst all of this madness is a guy called Ulysses (Avan Jogia) who’s fairly lost, having moved to LA in the hope of becoming an actor before realising that this was the “Lamest most soul crushing thing he could do with his life”, and now he’s just trying to avoid the inanity and boredom of his existence, carrying out acts of reckless stupidity just to get an adrenaline fix or, as he so eloquently puts it, “just for the fucking fuck of it”. He knows it’s going to get him in to trouble at one point or another but simply doesn’t care, or so he claims at the very least. He’s more complicated than he gives himself credit for though, being madly in love with his best friend Ford (Beau Mirchoff) who unfortunately for Ulysses is a rare example of a zero on the Kinsey scale. Ulysses is also having disturbing recurring dreams (a regular motif in Araki’s work) which he believes to be bizarre premonitions, along with the sensation that they’re all “Teetering on the brink of total annihilation” which given the title of the show is likely to be pretty accurate.

As well as Ford’s girlfriend Severine (Roxane Mesquida), who just happens to be a kickass super scientist type which is clearly going to be a big plot point late on, Ford’s also friends with Carly (Kelli Berglund), a camgirl and aspiring actress who’s bored shitless with life as well, while Carly’s boyfriend Jethro (Desmond Chiam) is a twatty type who appears as a corpse on a cop show and brags about the fame he presumes this will bring him. Ulysses is also lusting after Gabriel (Tyler Posey) a guy he finally meets after a couple of failed attempts and who might just be the man for him, at least if they live for much longer as at the end when he’s riding home he falls off his bike and realises he’s at the location where his dream took place, and what he sees will change his life forever. And quite possibly the rest of humanity’s as well.

This first episode takes it relatively slowly with the craziness only really kicking in right at the end, but that’s not an issue as it allows Araki and Sciortino to introduce all of the key players in a realistic manner, and to explore their lives in a fair bit of detail giving them depth that you may not expect them to have. Carly’s camgirl escapades let’s them show that she’s tired of acting out other people’s fantasies, at least on such a small scale, and while Ulysses initially lives for the moment it’s soon apparent that he wants much more out of his life than this. It also gives them the chance to discuss their character’s views on love, with Severine claiming she believes “Monogamy is a form of social control which is contrary to our nature” but also that when it comes to Ford, he has “the world’s most magnificent cock” and she’d feel guilty keeping it to herself. There’s also some fun commentary on Tinder, with Carly’s roommate Amber (Grace Victoria Cox) complaining that it feels like it’s just “Dicks flying at me 24/7”, the whole sequence is a smart and very funny one and Carly’s suggestion that the perfect Twitter picture is to look “hot and confused” is one of a good few moments which made me laugh.

This first episode isn’t the sort of thing which have you rolling on the floor clutching your sides and wondering if you’ll ever be able to walk again, it’s more nuanced than that even if it initially doesn’t look it. But it will make you smile an awful lot and there are laughs to be had, and it’s extremely quotable too even if some of the characters are (deliberately) pretentious. The cast are all uniformly superb as well, admittedly it’s one of those shows where everyone’s beautiful with amazing bodies, and there’s no one who’s ever gone near a double cheeseburger in their life let alone eaten one, but that’s Araki’s thing as he loves exploring the lives of the young, pretty and decadent.

It also shows a lot of promise as well, not only is it extremely well written and beautifully filmed but all of the characters are likeable despite their flaws (bar maybe Jethro, but these are early days and that might change along the way). It also looks like it’s going to be a pretty unique series given how it ends, which is a quite unforgettable scene, and I definitely can’t wait to see where Araki and Sciortino take us next, wherever it might be it’s all but guaranteed that it won’t be anywhere dull.