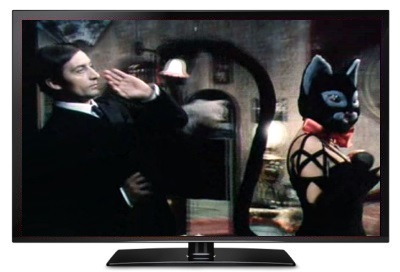 The bizarre yet brilliant Czechoslovakian comedy musical western Lemonade Joe is one of my favourite films (you can check out the review here) and director Oldrich Lipský clearly had a fondness for sending up American cinema as this 1978 effort sees him tackle private eyes in a very daft manner. It’s set around the turn of the twentieth century and based around the adventures of America’s greatest detective Nick Carter (Michal Docolomanský, looking slightly like Al Pacino), who’s admired by both Sherlock Holmes and Thomas Edison, and who survives three assassination attempts (or Wednesdays, as he calls it, a joke I originally thought Joss Whedon came up with) in the opening couple of minutes.

Nick Carter actually precedes Sherlock Holmes as he was created in 1886, first appearing in New York Weekly but during the last century he’s been at the centre of over one hundred novels, several radio shows and a number of films (both in the silent era and the thirties and forties, while a tv pilot was also made but sadly not given a full series). Carter started out as a detective before being turned in to a secret agent, but any knowledge of him and his antics aren’t needed in the slightest to enjoy Dinner For Adele. All you need to know is that he is a damn good detective, comes complete with a number of bizarre gadgets and inventions (it’s been suggested that Inspector Gadget is based upon him, but never confirmed), and is something of a dashing figure too, perhaps slightly arrogant on occasion but not enough for the character to be in any way unlikeable.

After surviving the aforementioned assassination attempts Carter’s asked to investigate a missing person’s case in Prague which means Lipský can use his home city as a location and not dress everything up as if it’s America throughout the whole film as he did with Lemonade Joe, and Carter’s teamed up with Commisar Ledvina (Rudolf Hrusínský) who slaps rather than boxes and is rather fond of the odd pint or twenty. Carter is quickly introduced to Countess Thun (Kveta Fialová) who he presumes to be newly widowed, but is surprised when he discovers that he’s not solving the mysterious disappearance of a man but of a dog. Being an upstanding gentlemen this doesn’t put him off the case, which is fortunate as he soon learns that everything is far, far more complicated than it seems.

The slightly twisty storyline is filled with all manner of delights as it soon becomes apparent that the villain of the piece is Carter’s former nemesis, mad scientist The Gardener (Milos Kopecký, who was also the villain in Lemonade Joe) who’s the kind of scoundrel who cackles like a lunatic, plays a violin to a floating eyeball just so that it weeps, and escapes from our hero using a metal tin to travel down several flights of stairs. He also doesn’t commit the murders himself, instead using a plant who might just have a lot in common with Audrey II, though sadly it doesn’t belt out any killer tunes.

Commisar Ledvina makes for a fantastically fun partner for Carter, always happy to do whatever is asked of him while also making sure he can be drunk as often as possible, and due to his role the film features a surprising amount of sausage eating. Romance comes in the form of Kvetuska (Nada Konvalinková), the granddaughter of botanist Professor Albín Bocek (Ladislav Pesek), who The Gardener plans to kill, and all of The Gardeners henchmen provide strong laughs as well, there isn’t a weak performance from any of the cast. But Carter is the highlight of the picture, he’s a suave, committed and inventive detective who’s able to karate chop a wall in to pieces, get the truth out of a suspect by a quite unique interrogation method and his various gadgets are always a delight.

It features animation from Jan Svankmajer (best known for directing gloriously surreal versions of Alice and Faust), the best of which tells von Kratzmar’s origin story in an engaging manner, but his design of the plant when it’s in a murderous mood is oddly alluring too. The inventions are entertaining stuff, from the world’s first (sort of) mobile phone to an exploding cigar (a present from Alfred Noble, no less) and the kind of face masks you normally only get in Mission Impossible movies, along with a device which rather handily lets him fly, there really is very little Nick Carter can’t do.

Also known as Adele Hasn’t Had Her Dinner Yet, Nick Carter in Prague and Adele Hasn’t Had Her Supper Yet, it’s normally a sign of a bad film when it has that many titles but fortunately that’s not the case here. It’s not quite as great as the joyously silly Lemonade Joe but it’s an extremely charming movie, a mix of slapstick, silliness and parody which has a smart,sharp script, rousing performances from all involved and is an extremely enjoyable way to spend one hundred and two minutes. It’s certainly made me want to seek out all of Lipský’s other work as he has a strong eye for comedy, and a remarkable ability to create tight, clever and very very funny cinema.