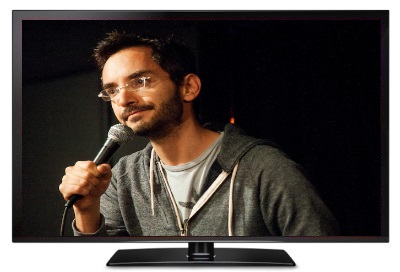 Myq starts tonight’s show stating that if anyone wishes to use the toilet he’s more than happy for them to do so, which might seem an odd way to begin but it makes perfect sense by the end, somewhat beautifully. And that word sums up his comedy in general, which is told at breakneck speed, contains his thoughts and theories on a variety of subjects and contains an enormous amount of very funny moments, many of which saw the London audience break in to applause, and those that know London audiences are probably aware that doesn’t happen often.

The initial comment about using the toilet also leads in to a great segment on what you can say if someone asks if the cubicle is occupied, and then he begins telling a story about the time he performed a gig in Tennessee at a venue called Moe’s, and was not only bizarrely heckled with the words “Roll Tide” but also how he got in to a discussion about gun control and the amount of gun related deaths in the state with the owner of Moe’s. It might not seem like the most fertile of ground to generate laughs from but Kaplan does so with aplomb, and it also leads in to one of the central concepts of the show tonight.

For Kaplan has a crazy notion that I’m sure many will consider the words of an utterly insane man in these torrid times – but he believes we should “Be nice”. Ah, if only many more people felt the same way, for he makes a superb case for why it should be so, including how it’s better to be murdered than to be a murderer, as Jesus fell in to the former category after all, and if someone does irritate you then he has a glorious idea about how you can commit the perfect crime by not actually committing any crime, yet still get satisfaction from the person in question dying years later. Much of this part of the show revolves around the opinion that it’s pointless to hate, which then becomes more complicated (but no less funny) when he talks about his theories about the meaning of life, time and how the big bang means we’re all part of each other.

The above may seem like drug fuelled ramblings, and that’s because they are, but that doesn’t make them any less hilarious as Kaplan discusses his fondness for the drug Ayahuasca and the experiences he’s had while on it. He’s an incredibly self-aware comedian though so don’t think for a second there isn’t mockery and self-deprecation when it comes to his material, and it’s by no means all high brow stuff either as it features delightful segments on his favourite pasta, why Italian’s from New Jersey call tomato ketchup gravy, and why his comedy is like his favourite movie Inception, and also his favourite movie The Usual Suspects.

He also has a lot of extremely funny commentary on the nature of braveness, his being a vegan and the way people respond to this, and how he loves Nickelback despite (and probably because) he’s never heard a single song by them. Throughout the gig there’s a lot of impressive wordplay, smart and unpredictable callbacks, a few very silly gags and lots of very clever ones, all revolving around a theme which would definitely make the world a better place if people took it on board. Allin all it’s a fantastic and fascinating hour of comedy, and one which shows just how unique and special a comedian he is.