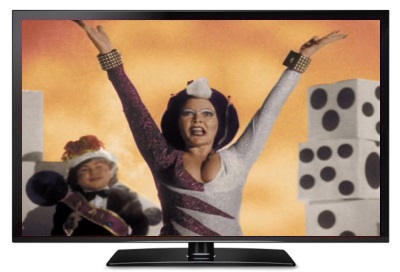 Over the far too many years I’ve been alive I thought I’d seen it all cinema-wise, but then Forbidden Zone came along and offered up a whole bunch of offbeat delights and extremely weird and deliberately stupid moments. Produced and directed by Richard Elfman whose more famous brother Danny created the score and stars as Satan, it’s insane from start to finish and I wish I could wholeheartedly recommend it but it does have certain issues which spoil events.

It’s a low, low, low budget sci-fi fantasy musical where only one actor (Fantasy Island’s Hervé Villechaize) actually got paid for starring in it, and the rest of the cast is made up of friends and family and unusual people they knew (the performance art duo The Kipper Kids, for instance) and so some of the acting is a little on the dodgy side but everyone’s clearly having a ball, and a bloody large ball at that which is probably moon sized, so it’s hard to complain.

Originally shot as a series of musical numbers with a plot later inserted, surprisingly you can’t actually tell and the hijinks everyone gets up to are mostly fun. It’s based around the rather outlandish Hercules family who have recently bought a house which just happens to have a doorway to the sixth dimension in the basement, a place which is even stranger than their already oddball existence. When cousin Frenchy (Marie-Pascale Elfman) accidentally falls down the stairs and through the door we’re thrust in to this bizarre new world. The Forbidden Zone is ruled over by a King (Hervé Villechaize) who has a bunch of concubines and a half man half frog servant, and is married to Queen Dorris (Susan Tyrrell, easily turning in the best performance), and they have a daughter who seems to dislike wearing clothes, because it’s that sort of film where women are often treated as sex objects and little more than that. The rest of the family eventually try to save Frenchy but take there time doing so, and thus the King and Frenchy fall in love with each other, much to the horror of Queen Dorris.

It’s one of those films where everyone’s either grotesque or a caricature, but at least it’s deliberately so here, and the film certainly owes a debut to both Monty Python and John Waters. It’s as camp as camp can be, and so over the top that many might struggle with it’s ridiculousness, but the set design and animations are pleasingly quirky and visually it’s a treat throughout. There’s an enormous amount of quite simply deranged scenes in it but among my favourites were the King dreaming of having a zombie army, zombie navy, and zombie space cadets, a human chandelier who dies, turns in to a skeleton, but is still somewhat active, and a shoot out at the school between a uzi wielding teacher and a pistol shooting student in an institution where all the students are adults pretending to be kids and who wear paper bags when reading, which is truly daft but fun. There’s also a demented brief trip to hell, one character gets decapitated but still sings beautifully, and the ex-Queen’s rant about a screenplay she’s writing made me laugh a lot as well.

The majority of the songs are strong but it has to be said that they only work within the context of the movie, it’s a rare case where I’ve no interest in owning the soundtrack, and I’m a man who regularly listens to mp3s of songs from The Apple. I did enjoy them though, don’t get me wrong, they’re well sung and appealing and never outstay their welcome, and pretty witty too. I saw the 2008 colourised version and while I’m normally against such a thing it was apparently always Richard Elfman’s plan, he just couldn’t afford it back in 1980, and as he oversaw the colourisation I’d definitely recommend seeking out that edition of the movie.

Unfortunately there is a downside as it’s also a fairly problematic piece. I don’t think it set out to actively upset anyone, it’s simply incredibly puerile when it comes to everything that it does, but there’s use of blackface, more than a fair amount of gratuitous and pointless nudity, and women are treated pretty poorly throughout with their not minding if someone starts having sex with them at random. Characters also call each other fags and faggots and it has issues with it’s black characters (they’re all pimps, gamblers or murderers) but then all of the white characters are pretty horrible too and I guess it’s a case where the director just had a dismal view of humanity in general, but that still doesn’t excuse it in the slightest. Again, I don’t think they wished to cause offence, it’s just lazy attempts at outdated humour which fall flat.

It’s frustrating that it has such elements as otherwise it might fall in to the Cult Classics category, but due to the issues above I can only cautiously recommend it. But if you can look past such things it’s a strangely addictive film, quite possibly from the mind of someone who could do with psychiatric help, and often very funny – there’s not a huge amount of laugh out loud moments but you’ll find yourself smiling throughout, and at a brisk seventy five minutes (seventy discounting the credits) it’s fast paced and leaps from one preposterous scene to the next with glee.