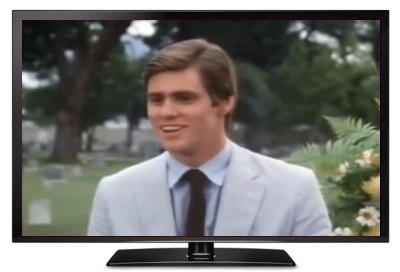 The first time I ever saw Jim Carrey on tv (rather than lurking about in the bushes in my garden) was in the acclaimed sketch show In Living Color, which annoyingly I have to spell wrong as it’s an American series, but six years earlier he’d made it on to US screens in a largely forgotten sitcom called The Duck Factory which only ran for thirteen episodes. It also starred Jack Gilford, Nancy Lane, Jay Tarses, Don Messick and Julie Payne, and bar Messick who was the voice of Scooby Doo, yeah, I hadn’t heard of them either.

The show was based around Carrey’s character Skip Tarkenton, a naive young man who heads to Hollywood and gets a job on a kid’s cartoon made by a small animation studio. I’ve only seen the first episode so far as a) I’m lazy and b) I’ve a huge backlog of tv to catch up on as it is, but it’s surprisingly likeable. Given what the majority of US sitcoms were like in the eighties (and the UK ones, for that matter) it’s pretty sharp, has an unusual setting, and a cast of characters who are pretty diverse. It’s by no means ground breaking but there’s a mix of humour from black comedy to slapstick, and the script is pretty smart too.

It opens with Carrey on a bus seeing all kinds of crazy sights (motorcycle gangs, porn shops, Hare-Krishna’s) and declaring it to be “So great”. But when he turns up for a job interview he discovers that Buddy Winkler, the head of an animation studio and the man he’s here to see, is being carried off in a coffin. A terrible animated credits sequence (complete with the kind of naff song eighties sitcoms seemed to require by law) follows before we cut back to Skip being a little down about his chance of getting work now that Buddy’s deceased, but then he gets invited to the funeral by one of Buddy’s employees, Aggie Aynsworth (Julie Payne) and is overjoyed. It’s not packed with laughs but it’s a cute enough segment, and introduces the characters in a quick and efficient manner.

It’s certainly got a quirky sense of humour, when the car Skip’s in breaks down it gets pushed all the way to the funeral bumper car style, and when Buddy’s widow Sheree (Nancy Lane) forgets to book the minister they all take turns telling amusingly inappropriate stories about Buddy. The first from Aggie is packed with innuendo and used so that she can falsely suggest that Buddy wanted her to take over his job, and then Wally Wooster (Don Messick) gives an eulogy accidentally in the voice he uses for a show’s cartoon duck. After this Brooks (Jack Gilford) tells a daft tale about how Buddy refused to pay for his heart surgery but that turned out to be a good thing as the Doctor had mixed up his test results with another patient, and Skip’s also asked to speak despite not knowing him, and gives a positive, sweet natured message about “Good old fashioned American gumption” always prevailing, which is enough to get him an invite to the wake afterwards.

Heading off to the wake they all realise that Buddy lied about how well off he was as he owns a mansion, and his widow Sheree reveals she’d only known him for three weeks and that they’d met at a topless ice show when he was mourning his previous wife. It’s amiable stuff, not laugh out loud material but it’s certainly very likeable, and moves the plot on effectively when at the end Aggie gives Skip a job. Then we cut to what’s presumably a few days later and Skip’s first day at the studio, he’s introduced to his brand new world by Roland (Clarence Gilyard Jr.), Aggie and Wally, where he’s given Buddy’s “special room” to stay in, which comes complete with a double water bed, just in case by this point you hadn’t realised what a slut Buddy was. The Network then calls and no one wants to answer the phone, so Aggie does and thus solidifies her position as the new boss.

When sent off for coffee everyone looks at Skip’s work and thinks it’s superb, and shortly afterwards Skip works with Brooks on a sequence which we see animated in a fairly basic black and white manner, it’s a fun cartoon and makes the show somewhat different to everything else that aired at the time. It’s also no surprise that Brooks loves his suggestions given how funny they are, before explaining they can’t do them as Aggie will find it too expensive and that right now they use “a bunch of Indians” at 50 cents an hour, which is the only dubious line in the whole show. In the following scene it looks like everything’s going to go wrong though, what with writer Marty (Jay Tarses) threatening to quit, though Skip talks him round and gives a sterling speech about how little kids, sick people and shut-in’s all need the show. It gets worse however as when Aggie returns from a meeting at the Network she reveals that due to her demanding more money they’ve been cancelled, and Sheree enters saying she’s thinking of selling the company. Luckily Skip’s full of inspirational speeches today and talks Sheree round, and at the same time the network call back and Aggie persuades them to give them another shot, and they end up having forty eight hours to create something, with Aggie threatening Skip that if he fails he’ll never work in this town again. Which is a fairly downbeat ending, but it’s a much needed darker element to offset Skip’s endless optimism.

It’s basically a work place comedy but quite the unique creation, the mix of animation and live footage is effective and hopefully something they made more use of in the following episodes. The first was of a fine quality so I probably will get round to watching them at some point, which I didn’t expect to be the case when I first started the episode. There are some downsides, it doesn’t make use of Carrey’s trademark physicality and elastic face, he’s not quite the straight man in the series but he’s not a million miles off from being so, and most of the time other than giving motivational speeches he’s grinning inanely. But the rest of the cast are pretty decent, most of the women have strong characters, and the gag rate is high, so it certainly doesn’t deserve to have been forgotten in the way it seems to have been done.

Related Link:
You can watch the show on youtube here.