One And Done: Golden Years 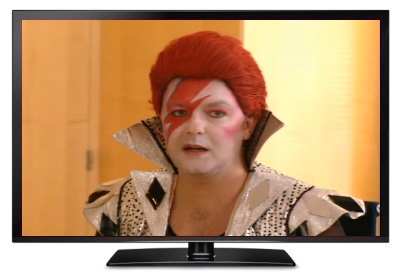 It may be hard to remember given his recent output but a long, long time ago Ricky Gervais used to be funny. No, hear me out, I know young folks will probably think I’m making this up but he made a show called The Office that was heartwarming and hilarious, and which suggested that his was going to be a talent to watch. He followed it up with the patchy but sometimes funny Extras and I was still fond of the man, but unfortunately for the last decade or so he’s made a series of shows and films which have been fucking awful, many of them containing a lot of painfully weak racist, homophobic and sexist jokes which are supposedly made in an ironic manner by characters who are idiots so it’s okay to laugh at them. But it truly isn’t.

If Gervais had just done this once or twice (as he did in both The Office and Extras) it might have been forgivable, but his whole career now seems to be based around mocking minorities and saying racist and sexist things until someone corrects him on his behaviour and he finally sees the error of his ways. And don’t even get me started on Derek, a character that started off as a piss take of those with learning disabilities (check out some of the early appearances in various youtube videos if you don’t believe me) before suddenly supposedly becoming some kind of hero to the masses because he was so kind and thoughtful. Except he wasn’t, he was often a right shit to people, the show frequently made fun of the overweight and the elderly, and christ if I lived in the home he worked at I’d have committed suicide in days.

Anyway, getting back to the original point, Gervais was a pretty decent writer around the turn of the century and in September 1999 Channel Four aired the pilot for Golden Years as part of their Comedy Lab strand. Written by Stephen Merchant and Gervais it was filmed in a documentary style and starred Ricky as Clive Meadows, a manager of a company which owned a chain of video stores, but Clive wanted to make it big in show business, so was clearly nothing like his most famous creation David Brent in the slightest. The show follows Clive in the months prior to his supposedly appearing on once popular talent show Stars In Their Eyes where members of the general public got to dress up as their favourite musicians and attempt to impress the world with their impersonations.

It starts with Clive in a meeting dressed up as Bowie, much to the confusion of his co-workers. It’s not the world’s funniest joke but it’s a decent enough start, before it cuts to him being being interviewed by an off camera Stephen Merchant who gets annoyed with him, and quite understandably too as the characters something of a twat. This becomes even more apparent when in the middle of a meeting Clive gets up on the table and starts singing, much to the chagrin of fellow manager Barry (Nicholas Hutchison) who orders him to stop, uttering “You’re not David Bowie” only for Clive to respond “As good as” in an extremely Brent-ish manner. This sort of delusional behaviour continues as Clive starts to see himself as a celebrity who could appear in adverts for the video shops, which allows Gervais and Merchant to make a lot of puns mixing Bowie songs with films like “Rebel Rebel Without A Cause” and “Big Trouble In Little China Girl”. To be fair it’s a pretty funny sequence, but after this the laughs are few and far apart.

The reason it gets worse and worse as it goes along is due to Gervais’s tacky brand of ironic sexism, we’re supposed to be laughing because Clive is a bit of an idiot but his actions are so tiresome and tedious that it’s painfully unfunny. Just like David Brent he’s completely unaware that others think he’s irritating and annoying and so there’s plenty of cringe comedy as he makes wanking jokes in front of his embarrassed secretary Zoe (Amelia Curtis) and attempts to seduce her. There are some jokes in the show which work, like when Clive gets an agent who has a stable of pop star impersonators including Fake City Rollers and Non Bon Jovi, and one act called Sheena East 17, but then Gervais has to ruin it all by making a joke about a Queen tribute band called “Right Fred’s Dead” which made me groan so loudly my partner thought I might be having a stroke.

Clive gets even more irritating when after an argument with Barry he decides to leave the company and set up his own one based around the idea that he’s soon going to become famous, and when he meets his agent and learns that he has a Dolly Parton impersonator on his books he mimes having sex with her and licking her breasts in a grotesque manner which almost made me vomit up every meal I’ve ever eaten, it really is that horrible a sight. Then when he meets her he offers her a hundred quid for a look at her breasts because this man really is repellent, and I mean both the character and Gervais. The Dolly Parton impersonator leaves in disgust and I thought about doing the same thing, but stuck with it for the sake of this review.

The show hits an all time low when it cuts to a scene a month later where Clive is showing off in front of Freddie Mercury impersonator Ian and says to his secretary “Zoe, can you take something down for me? Your knickers, you’ll be throwing ’em at us soon live on stage. You little bitch. Only joking two coffees” and then when she brings him the coffees he slaps her backside. If I felt we were supposed to hate Clive with a passion and be appalled by his actions it might have been acceptable but throughout there’s the sense that like David Brent he’s just misguided rather than abhorrent. When Zoe angrily reacts to the slap Clive utters “Rape, rape” in a mocking manner, and I started to wonder how it was possible this was ever commissioned, let alone shown on tv.

The final scenes see Clive getting a call from the Stars In Their Eyes office and being told they’ve decided not to use him after all, and then Zoe’s boyfriend turns up and grabs Clive in a neck hold before slapping his arse and getting the Freddie Mercury impersonator to do the same, all the while singing like Mercury. On paper it might have sounded amusing but in actuality it’s just bizarre, like much of the rest of the show. Then it ends with Clive telling Barry he’s decided to knock the David Bowie thing on the head and as he hasn’t sold his shares in the company yet he’s coming back to work, and completely against character Barry seems happy about this, even though Clive then comments that he wants Zoe sacked. That would have been an unpleasant enough ending but Gervais must have realised he hadn’t done anything racist yet, so there’s a post credits scene where he walks in to a meeting dressed as Prince, and after Barry shoves him out of the room a colleague asks “Was he blacked up?”. And yes, yes he was, because Gervais finds this sort of thing amusing, though I doubt anyone else did.

It’s amazing that Gervais and Merchant went on to create such a fantastic show in the form of The Office after this, and if I’d seen Golden Years when it originally aired I’ve no doubt I wouldn’t have watched it as it’s so terribly shite. It’s supposed to be cringe comedy but instead it’s just all cringe, no comedy, and the sexism on display is repulsive, why they thought it’d be funny to see this ghastly character abuse people in such a way is something I’ll never be able to understand. Due to not featuring characters akin to Tim and Dawn it’s completely missing the warmth of The Office, and the appeal too, and is instead the antics of a middle aged shit acting offensively, and it’s genuinely one of the unfunniest pilots I’ve ever seen. Or episode of any comedy series ever made, thinking about it.

Related Link:
You can watch the episode on youtube here.