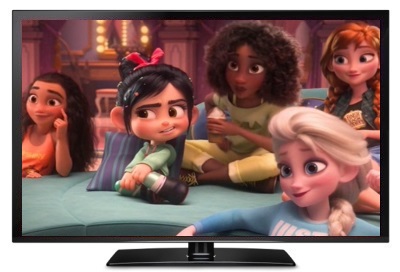 Wreck-It Ralph was a delightful flick, perhaps it was partly the nostalgia factor but it’s playful sense of humour and the characters interactions with various arcade games led to it being an enormously fun ride. It moved at an impressive pace while never forgetting to throw in lots of cute jokes, and the moral at the centre was carefully and considerately handled. Six years on we’ve got a follow up which mostly maintains the pace element but unfortunately it’s got a far lower gag rate and a lot of those present aren’t particularly great.

The sequel (oddly not called Ralph Wrecks The Internet, which they addressed in the trailer rather poorly) sees Ralph (John C. Reilly) content with his life as he hangs out with his best pal Vanellope (Sarah Silverman) in various video games and have daft fun in general. Vanellope’s bored with her lot however so Ralph makes her a new track, but because of this the kid playing the game breaks the controller and so the game ends up being turned off. Vanellope and co manage to escape in time, but now all are homeless, until Ralph hits upon the idea of buying a replacement on ebay. One quick trip to the internet and a misunderstanding about how ebay works and the main storyline becomes apparent as they need to raise $27,000 to buy it.

As well as well known sites like Facebook, IMDB and Amazon they’ve created some original ones, so we get a search engine called Knowsmore instead of Google (though the latter does make a brief appearance), and everyone watches videos on Buzztube rather than youtube, presumably as Disney hates the company, I guess it’s possible youtube denied them the right to use their service but it seems unlikely given all of the free advertising they’d have received. The film starts off with a few jokes about various video game characters (there’s a particularly fun gag about Zagrief from Streetfighter II) before we rush off to the internet and attempts at humour like Ralph mistaking Google for goggles and birds tweeting pictures of cute cats are the order of the day. It’s okay but it lacks the charm of the original movie, and events take a duller turn when they realise to earn the cash they need to take part in an online game called Slaughter Race. Unfortunately they’re foiled by a rather bored sounding Gal Gadot, and they quickly discover they need to become youtube, sorry, I mean Buzztube stars to make money.

Spoofs of popular youtube videos offers nothing new, and the film’s reliance on jokes about pop up ads feel a bit outdated given that many now have adblockers. A visit to Disney’s website feels like shameless advertising, and doesn’t make any sense given Wreck-It Ralph exists within the Disney universe. Shameless product placement is splattered across the screen for the next ten minutes, which I wouldn’t have had a problem with had it been entertaining but a lot of it is weak, the use of Star Wars characters especially. It does have some fun mockery of Disney princesses (which is the highlight of the film) and leads to a great song and dance sequence, but it’s not enough to redeem what’s come before.

This is a kids film so there’s no satire of the negative side of the net bar some minor ridiculing of pop up ads, and at no point do Ralph or Vanellope stumble on to Pornhub or the grimmer side of Reddit. Of course it’s a Disney flick and so that was never going to happen but I couldn’t help but feel it was a shame it wasn’t targeted to a slightly older audience, or there were at least the odd cheeky joke which only adults would get. The first one had a few of these but this is firmly a kids film, and a rather bland one at that. The closest it gets to a darker element is when Ralph reads the Buzzfeed video comments but that’s quickly skipped over, and a trip to the Dark Net sees them interact with viruses rather than heroin dealers and hitmen.

Wreck-It Ralph wasn’t a perfect movie but it was an enjoyable brightly coloured romp, and this is definitely a lesser work. It’s action packed and amiable enough but it lacks soul, the races in the original were a wacky ride but here they’re the kind of thing you’ll have seen in a lot of other movies / games. Worst of all is that too many of the jokes are poor and for me it’s easily the worst Disney theatrical release since Chicken Little, there’s a central message about the dangers of insecurity and trusting your friends but it feels a little tacked on and isn’t as organic as these things usually are. It’s a real shame as I was looking forward to this a lot and so it’s frustrating it’s uninspiring and mediocre, it’s not a bad movie, just a very, very average one.

Related Links:
Ralph Breaks The Internet is available on Itunes and Amazon from February 12th.