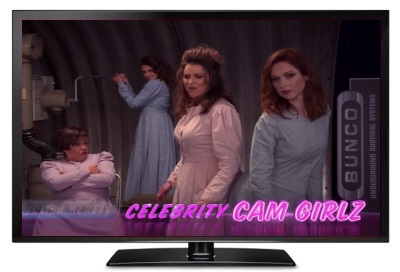 Unbreakable Kimmy Schmidt was always going to have a happy ending. For one thing it began with Kimmy having been kidnapped for fifteen years by the Reverend Richard Wayne Gary Wayne and if it had ended up with Kimmy in a dark place it would have been beyond bleak. But it was also guaranteed to leave you with a massive grin on your face because it’s almost always been a joyously upbeat show and though the characters have had to battle through various unfortunate scenarios they’ve always shown that you can win if you have enough belief in yourself, if you fight hard enough, and to end it unhappily would have betrayed the central theme of the series.

But it was possible that the ending might not satisfy, or that however happy it might have been it wasn’t happy enough. It could have left certain questions unanswered that the mooted film might later resolve, or perhaps leave a few plot strands open so they could return to the characters a few years down the line. Thankfully that’s not the case at all though, it’s the happiest ending I could imagine for Kimmy, Titus, Lillian and Jacqueline, yet it’s not cloying or cliched in the way that some season finales have been (yes Parks and Recreation, I’m looking at you, I loved the show but the very final episode was a little too self-congratulatory).

We’ll get to the ending in a little while but the one big question was whether or not the rest of the episode live up to expectations. And for once, yes, yes it did. Unbreakable Kimmy Schmidt’s always been gag heavy and that was the case here too, as Kimmy rushed around the city desperately trying to save their apartment from being blown up, Titus’s dream came true with a starring role in The Lion King even though it meant missing Mikey’s wedding and the chance to disrupt it, and Lillian wanted to become a ghost, in what could have been a little silly even for this show but was saved by a couple of great cameos and the revelation that ghost sex is even better than you might imagine.

As almost always the jokes delivered too, from Jacqueline and Ely’s sit off and the discovery that the latter was blind all along to Kimmy’s attempt to make money via a mole woman cam girl site, which when it failed saw Jacqueline exclaiming “The Germans didn’t even like it Kimmy. The Germans!”. Lillian’s interaction with her former lovers (and concerns over the fact that she threw a hammer at Roland but not Artie) and Titus’s murderous thoughts all generated big strong laughs, as did the final four years later sequence which made me smile and get a little tearful at the same time, and it’s a rare show that can evoke such emotions.

Plot-wise everything made sense too, there’s been a central theme in these final episodes over whether people can change, and whether it’s time to move on if you feel your life is stagnating, and they addressed both here as all of the characters were able do both. Titus manged to resist the urge to not only kill the actress he was the understudy for and also not screw up Mikey’s wedding as he realised his dream was more important, Lillian admittedly almost died but after being saved found a new role in life, and Kimmy? Well, she finally realised that she needed to stop solving everyone else’s problems and concentrate on her own instead. Perhaps the sudden success of her book was a tad convenient but it had been set up nicely over the previous couple of episodes so it didn’t feel too forced, plus it ties in with the show’s optimistic outlook on life as it changes the lives of those who read it. Ah, if only something like that existed in real life, eh?

There was a slight misstep earlier on in the season with the Sliding Doors episode not sitting that well with me, it contained plenty of very funny moments and it was entertaining to see how their lives might have changed if they’d made alternative decisions, but seeing the characters act so mean and cruel to others didn’t quite work. It would have been fine with another series where the central character wasn’t so upbeat and optimistic and kind but watching Kimmy be callous felt wrong, and even though Jacqueline’s always been self-obsessed witnessing her treat her offspring with such malice didn’t make me laugh in the slightest. It was without doubt the darkest timeline, especially given the ending, but I guess it does highlight how lucky we are to have this version of the show in our lives.

One of the many reasons why the show was so effective in general though was due to it’s amazing cast, all of whom deserve an enormous amount of acclaim, Ellie Kemper is an amazing physical actress, quite possibly the best in the business, while Tituss Burgess made his character enormously lovable despite his often callous ways. Carol Kane was perfect as the occasionally demented but ultimately loving landlord. Though some of her scrapes and schemes weren’t always that appealing in this final season they remedied this and all of her antics were charming, and while her happy ending might not be a conventional one it made perfect sense for a person like Lillian. Jane Krakowski also did the same as Burgess and made someone who on paper could be awful pretty damn appealing, and Mike Carlsen’s dopey eyed Mikey was incredibly lovable even when he couldn’t see that Titus was the right man for him. The show also had a fantastic selection of guest stars or semi-regulars, it’d take too long to list them but all deserve to go on to bigger and better things if they haven’t already.

And so that’s that, the Unbreakable Kimmy Schmidt remains unbroken and her adventures in New York led to happiness for everyone involved. As much as I’ll miss these characters I don’t see the need for a film though, the ending was perfect and I wouldn’t want it to risk being sullied. I once wanted more Arrested Development, for instance, and once bitten twice shy and all of that kind of thing. It wasn’t a completely flawless series, there were a couple of episodes in season three which fell a bit flat, but it was an incredibly strong one, even better than Fey’s previous show 30 Rock which I admire an awful amount. The gag rate was shockingly high, the characters and story unique, the pro-feminism stance much needed (and the attacks on men’s rights activists even more so), and I’m glad the ending was so perfect for Kimmy and co as the real world is so bleak and we desperately need optimism in this day and age, and as much of it as possible.