One And Done: Hollyweed 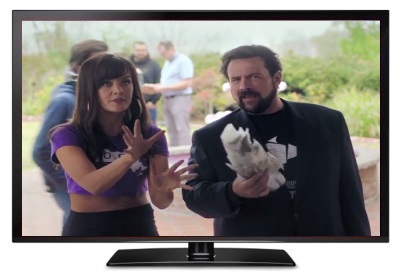 I wasn’t aware of RivitTv until I read about Kevin Smith’s pilot Hollyweed, which he made three years ago but couldn’t attract funding for. Then last year it was uploaded to RivitTv’s website which is supposedly dedicated to showing work by established film and tv makers with the audience then deciding whether a full series should be made and how much should be charged per episode, from $1.99 to $5.99. In theory it’s a great idea but so far Hollyweed is the only show on the service and it’s yet to be given a series.

In the show Donnell Rawlings stars as Nips and Smith plays Pete, two guys who grow and sell weed. It begins with the duo rambling away which leads to the first big laugh of the episode when Pete exclaims “There are no dragons in Schlinder’s List”. And okay, Schlinder’s List is an easy target to make jokes about, but it’s a strong joke and a decent way to start things off too. After this it jumps to Pete and Nips working in the shop and talking in an amiable enough way about different types of marijuana, until they head outside and bump in to longtime Smith regular Jason Mewes who stretches his acting muscles by playing a homeless guy who seems a bit crazy and claims that Rolo is his superhero name. It’s all an excuse to let the three guys shoot the shit, as they used to say but hopefully no longer do so, but the dialogue is decent and the scene has a good few funny moments.

Whether you enjoy Hollyweed or not may partially depend on your experiences with weed as a lot of it is stoned people having stupid conversations, but thankfully most of it is pretty funny, and far funnier than the kind of chat real life stoners have (or so I’ve heard, because marijuana’s illegal in the UK and I’m admitting nothing that will see me imprisoned, the police are famous for reading comedy blogs after all). There’s also a great joke about Smith’s sudden weight loss, actually due to Smith having a heart attack and needing to lose weight, yet they incorporate that unfortunate incident in a really funny way. But on the downside some of the porn related jokes are a bit tiresome, and it’s a shame there’s quite so many. Still, with Brookline no longer part of the picture that hopefully shouldn’t be a reoccurring situation and a full series could be fun, I’ve no idea if it will happen or not but if it does I’d definitely check out at least a few more episodes.

Related Links:
Kevin Smith’s Official Site.
American readers (or anyone with a VPN) can watch the pilot on RivetTv.