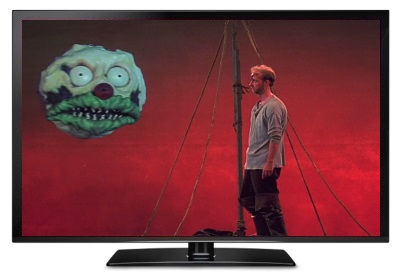 Like all sane human beings I love Chris Elliott a great deal, partially because Eagleheart is a thing of beauty but also due to Get A Life, Groundhog Day and a huge amount of guest appearances in some of the best sitcoms yet made. And also How I Met Your Mother, but hey, nobody’s perfect. In 1994 he was pretty damn popular and so given a leading role in a movie, but when Cabin Boy came out it received an absolute kicking,

With a story by Adam Resnick and Elliott himself, with Resnick also handling scripting and directing duties, Elliott plays Nathaniel, a young obnoxious posh kid (despite clearly being in his thirties) who’s graduated from school and set to take over his family hotel business. He’s been booked to travel on a cruise ship but gets on the wrong one after being misdirected by a snarky local played by David Letterman. And so he’s off to sea with a bunch of reprobates including James Gammon, Brion James and Brian Doyle-Murray, but when he realises the mistake in the middle of the night he attempts to guide the ship to his family in Hawaii, inevitably causing chaos. Just over half way through Trina (Melora Walters) is brought on board to provide a love interest for Nathaniel though predictably (and understandably) she hates him at first.

It didn’t deserve the mauling it received upon its release but it’s almost the definition of a mixed bag. Some jokes work well but others fall so flat they could be mistaken for a concrete slab that’s been crushed by the world’s strongest vice, and the film’s biggest problem is that Nathaniel’s a hard character to empathise with given his superiority complex, and his fellow shipmates aren’t exactly appealing either. That said there are some very funny moments, including Nathaniel being scared of a rabbit, Letterman’s cameo, and Nathaniel’s horror at briefly breaking in to a sweat generate some strong laughs. There’s also some likeable weirdness with Russ Tamblyn’s half man half shark creature becoming fond of Nathaniel, a monster made out of ice who attacks the ship is oddly delightful, while Nathaniel’s encounter with the goddess Calli and the ending as a whole are joyously daft.

Unfortunately on the flipside some of the slapstick is dull and predictable, the dialogue rarely sparkles and though Andy Richter’s normally a reliable source for mirth here his incredibly stupid character is misjudged and it’s no bad thing that he’s killed off early on. A surreal sequence where Elliott hallucinates a talking cupcake doesn’t work, and other oddities like a ship’s maidenhead (Ricki Lake) who is alive and growing a beard aren’t developed in any interesting ways. It’s disappointing because there’s a decent concept here and the bizarre elements often appeal, but it’s let down by a lack of likeable characters and too many jokes which just aren’t funny.

Originally due to be directed by Tim Burton who produces instead, it has the look an early Burton movie (Pee Wee’s Big Adventure being the biggest similarity) and though many of the scenes are clearly shot on a sound stage they look charming nonetheless. Perhaps if Burton had been on board he’d had made Elliott’s character more likeable which would have improved the film a lot, and if the script had just been a little tighter it could have been a cult classic, but unfortunately things just didn’t pan out that way. The hatred the film received is bizarre though, Resnick later commented “They weren’t merely bad reviews – it was like we had committed a crime or something” and they resulted in Resnick never directing again, and it brought his partnership with Elliott to a close as well. Which is a great shame, as there’s enough here to suggest if they’d carried on working together they could have created something really special.