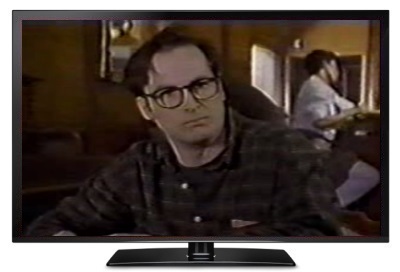 Long before John Simm (or for American readers, Jason O’Mara) travelled back to the 70’s and was all rather confused as to what the hell was going on, Better Call Saul and Mr Show star Bob Odenkirk created a pilot of the same name with Janeane Garofalo and Jack Plotnick. Sadly it didn’t see the trio bouncing around on the Red Planet but instead they hang about in a coffee shop called Mars, in a show which the LA Times aptly described as “The Anti-Friends”.

Made for HBO the pilot is only fifteen minutes long and in it Janeane plays Janeane and Bob plays Bob and Jack plays Jack, because laziness is always fun. It begins with Bob meeting Janeane in the coffee shop and moaning about how he’s struggling to write, and mocking her suggestion that he write about what he knows with “I’ll write a story about the time my dad got drunk at a barbecue and fell asleep, oh, that’ll blow people’s mind”. It sets out his general cynical take on the world and his declaration that he’s going insane is believable. It’s not that funny to be fair but it does introduce the set up and the characters and I guess that’s the main thing.

At this point we’re introduced to Jack, an actor who’s a fairly stupid individual, at one point he doesn’t know who Andy Warhol is and he later devises a plan to drink various coffees as that will help him work out what country he is in if he’s ever lost. It’s kind of hard to know why two pseudo-intellectuals would hang out with Jack but I guess if it had been developed further they’d have explained that. Jack then reveals that the former rock and roll star and current poet Lou Cage is in town and Odenkirk is thrilled because he’s been such an influence upon him. To keep costs down he’s doing a reading in the coffee shop, which is all rather convenient, and we get to see Cage read his poem “The Ballad of El Fucko”. It’s sub-Ginsberg nonsense and fairly funny, especially when he shrieks “Here comes the shit train” and “I cough up blood, gurgling screams about the American Dream ripped apart at the seams”.

Shockingly they then cut to a different location, Bob’s apartment, where he and Janeane are chatting to Lou as the latter rambles on about how there’s a tribe who “Masturbate over corpses to consummate with death” and Janeane drily responds “I guess I can cross off Brazil in my places to die list”. Bob’s in fanboy mode and lets him stay on his couch but in the middle of the night Lou comes in to Bob’s room when he’s sleeping, spanks him a couple of times and suggests “Let’s ride the knife’s edge of pleasure and pain”. Bob being uptight and Wasp-ish freaks out though and rejects him. Laughs are few and far between, but it is mildly amusing at least.

The next morning they’re back in the coffee shop and gossiping about the previous night’s incident, with Bob still seemingly traumatised as he points to his face and a single tear falls down it. Next they’re outside with Bob selling everything of Lou’s that he owns which leads to Janeane asking “Why can’t you separate the art from the artist?” and Bob screeching “Because the artist spanked me”, but when someone tries to buy one of Cage’s records Bob demands $750,000,000 for it suggesting he doesn’t really feel that aggrieved. And then the episode comes to an abrupt end, which possibly means more was filmed but not leaked online, or that they just ran out of money and so brought it to an end.

It’s mostly set in the coffee shop so if it had been taken to series I presume they’d have expanded the scope a certain extent but it must have been an incredibly cheap pilot to make, so the only reason as to why HBO turned it down is because they disliked it. Admittedly there’s nothing here which suggests it would have turned in to a classic sitcom of our time, there’s some laughs but it’s not hilarious stuff, and bar Janeane the characters aren’t that likeable. But if they’d played around the concept further and expanded upon it a little it could have been pretty damn funny stuff, and so it’s a shame they never got the chance. Then again, if it had prevented the creation of Mr Show a year later that would have been a tragedy, so perhaps it’s best that history played out the way it did.