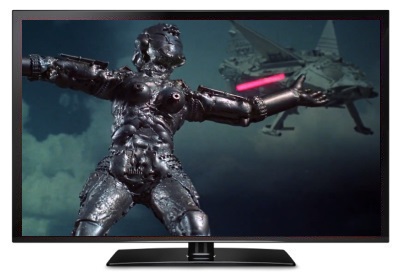 From the get go I knew this was going to be a bit naff as soon as the words “Roger Corman Presents” came up on the screen. If you’ve not heard of the less than great man, he’s famous for making movies as quickly and as cheaply as possible and who in the fifties and sixties directed some of the trashiest films ever committed to celluloid like She Gods of Shark Reef and Attack of the Crab Monsters. As a producer he’s fared a little better, with films like Death Race 2000 and, um, well I have fond memories of Battle Beyond The Stars from when I watched it as a kid, but in general the best you can hope for is a film that will be fun to mock which fortunately Star Crash is, and then some.

So if you fancy watching a film with effects that make Colin Baker era Doctor Who look good, which comes complete with really bad stop-motion animated monsters and is a clear cash in on the success of Star Wars but incredibly camp and often nonsensical, well you’re weird, but I do like you. I’m not convinced that certain spaceships weren’t made out of lego, the special effects look like they have a combined budget of £2.49, certain explosions look like indoor fireworks, John Barry tosses off a sub-John Williams score that I can only guess took less than an hour to complete, much of the acting is all rather ropy, with a few of the main performances overdubbed because they couldn’t afford to fly over the actors to re-record them, and yet somehow it’s still an enormous amount of daft fun.

This nonsense starts with a ship floating through space and then somewhat inexplicably transparent red planet like balls attack the ship and everyone’s screaming in agony before it explodes. Then space smuggler Akton (Marjoe Gortner) and Stella Star (Caroline Monroe) are being chased by police robots (I swear I’m not making this up) and Akton seems rather passe about the fact that they’re probably about to die. After escaping the police robots they come across a weird spaceship and rescue it’s sole inhabitant but then are captured by the police and Stella is forced to work in a furnace (because futuristic tech seemingly needs such a thing) for the rest of her life while wearing hardly anything, and because the director was presumably a massive sexist she stays in that costume for another twenty minutes. Oh, and Joe Spinell as Count Zarth Arn (half Darth Vader, half Ming The Merciless) and his league of darkness (still not making this up, honest) briefly make an appearance so that you know who the main villain is.

Anyhow, Stella escapes almost instantly but then runs in to Chief Thor and the robot policeman Elle who are freeing her for some unknown reason. And yes, you will repeat the words “for some unknown reason” again and again while watching this movie as a lot of it really doesn’t make sense. Plot-wise it moves at an impressive rate though as Akton and Stella are reunited and taken off to meet the gentle and all rather lovely Emperor of the Universe (Christopher Plummer, doing his best with this silliness) and he asks Akton and Stella to destroy Count Zarth Arn’s planet destroying weapon (hmmm, that rings a bell) and hey, track down his missing son too if they’ve got the time.

Chief Thor tries to do us all a favour by killing Akton off.

Stella teams up with the robotic Elle and ends up on a planet filled with amazons on horseback, with it turning out that Queen Corelia (Nadia Cassini) is in league with Count Zarth Arn and plans to kill them. Of course they quickly escape before a massive giant robot with a big sword chases them, but luckily Akton turns up to save the day. A quick space battle ensues before Stella and Elle are shuttled off to Hoth, ahem, sorry, I mean some other snowy planet because Akton prefers to stay on the ship fucking about with some weird glowing toy rather than helping them out. Fortunately Chief Thor knocks him unconscious and it turns out he’s in league with Count Zarth Arn too, as doing so is all the rage these days. But alas Akton isn’t really dead and so he manages to kill Thor and rescue a frozen Stella and after thawing her out they put her back in that sexist costume again for absolutely no good reason at all.

At this point we’re only half way through the movie and it gets even madder as it goes on. There’s a rock covered planet filled with cavemen, David Hasselhoff wearing a weird gold Incah influence helmet and shooting laser beams out of his eyes, Akton turning up with a lightsaber, sorry, laser sword in another hey, why didn’t he use that earlier moment, or later on for that matter, a planet blows up and bits of paper fly about, and much more insanity takes place. Certain scenes don’t really make much sense initially, Akton is able to work out what a severely brain damaged man is saying when no one else can for instance, and at one point he activates his previously unmentioned magic eyes (which would have helped them out on several previous occasions) and which make him impervious to laser beams, and indeed reflect them on to a bad guy. But then it’s revealed that he’s got special magical powers (despite not telling Stella about them for years) and can predict the future too along with a whole other bunch of things which conveniently help them get out of near death experiences.

Most of the highlights come via Elle the police robot (Judd Hamilton), a chatty fella who gets nervous every time they go in to hyperspace, see water or steam, and this attempt at copying CP30 is laughably naff but strangely endearing and he provides most of the films laughs, coming out with madness like “Look, amazons on horseback, let’s hope they’re friendly”, “I too respect you Stella. You are the nicest human being I have known. Now maybe is a good time to use your ancient system of prayer and hope it works for robots too” and “Time for a little robot chauvinism. You stay here. You do not have to worry about me” which signposts his inevitable if not permanent death. The rest of the cast have their fair share of rum dialogue too, but if I quoted every dodgy line this review would be over eighty thousand words long though “You’re the only human-like friend I’ve ever had” made me laugh a lot the most given it’s context.

Kudos has to go to Caroline Monroe who gives it her all and does try to make the whole thing a bit more fun, and Judd Hamilton is enjoyably silly, though Marjoe Gortner’s mostly cliched performance is a bit naff, he’s cheery and over the top most of the time and it’s obviously a rip off of Han Solo except he has no charm in the slightest and mostly comes across as a bit creepy. Christopher Plummer attempts to take the whole thing seriously at least, gawd bless him, and his is the most reliable performance.

It’s a bizarre flick but it can’t be denied that it’s terribly entertaining, it jumps from scene to scene as if the editor was on a mixture of cocaine and speed and had also drunk two hundred and eighty cups of coffee in the space of an hour, the dodgy acting is mostly amusing and the script will make you laugh even when it’s not supposed to, so any and all fans of sci-fi comedy will probably be rather enamoured with it.