One and Not Done: Family Guy

Family Guy has of course gone terribly wrong in recent years, there’s still the occasional decent episode but many of them are agonisingly lazy, with the kind of cutaway jokes that a drunk ten year old come could up with. But back in December 1998 when it first aired on Fox it felt fairly fresh and didn’t rely on lazy shock material half as much as it does now. Ah, if only we could return to those days. The show has a fairly long history prior to making it to our screens though as it was first developed when Seth MacFarlane was still a student at the Rhode Island School of Design and he submitted an animated short as a thesis film called The Life of Larry.

Introduced by MacFarlane it’s a poorly animated affair which begins with a Star Trek parody which is watched by Larry and his talking dog Steve, though neither look like Peter or Brian in the slightest. It’s not that great to be honest, there’s a weak Redshirts type joke in the Trek parody, and most of it is mocking Shatner’s acting style in ways seen countless times elsewhere. Larry’s wife is a two dimensional whiny sort who wants to move as the city is so violent, and there’s a brief cutaway based around the idea that in London they don’t have drive by shootings but rather “Drive by arguments”. Then after a brief bit of exposition there’s the first version of a cutaway we’d see in both the unaired and broadcast versions of Family Guy where Larry watches Philadelphia and laughs at the concept of Hanks’ character having aids. More of the Trek parody follows and then there’s a scene with Larry in Church with God proclaiming “I hate this story”, which also appears in both Family Guy pilots, while a gag about Larry farting for the first time when he was thirty pops up in the broadcast pilot. The animation style is pretty ugly and though it may seem mean to criticise it given that it’s the work of just one man it’s largely unfunny and weak from start to finish. 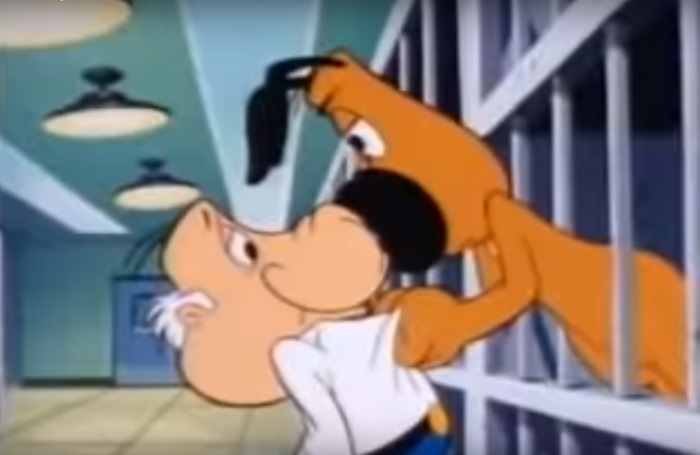 Six months after making the above MacFarlane produced a second short featuring the characters called Larry & Steve, which benefits from far better looking animation and sees Steve narrate a tale where he almost died as he was in the local pound and about to be put down when Larry rescued him. It feels like a pretty mainstream cartoon with gags that wouldn’t seem out of place in a Loony Tunes cartoon, as Larry’s car is cut in half but carries on crashing through various objects before finally joining up again, a dodgy bed spring leads to Steve ending up buried in the ceiling and after bouncing off of a sofa Steve flies through the sky and hits an airplane and survives despite the subsequent crash. There’s also exaggerated facial expressions and eyes popping out left right and centre, and it’s surprisingly PG if not U rated. Whereas The Life Of Larry had a lot in common with Family Guy and contains jokes MacFarlane would later recycle for the show, bar the voices and Brian’s snarkiness you wouldn’t imagine this was from the same creator. It’s odd seeing such a muted version of MacFarlane’s comedy but this isn’t necessarily a bad thing, though if it had been made in to a regular series the only way I could it see it surviving is if it had aired on Cartoon Network rather than Fox.

After the Larry & Steve short Fox gave MacFarlane $50,000 and he worked day and night for six months animating the first Family Guy pilot episode, and when he presented the finished product to Fox they loved it. Though the animation is slightly poorer much of the material found in the unaired pilot made it in to the first ever Family Guy episode to be shown, Death Has A Shadow, including jokes about The Brady Bunch kids being tortured in a snake pit and fire room, Peter noticing the moment Meg touches the thermostat, Stewie wishing to kill Lois in various ways, Peter getting drunk in inappropriate situations, and the stag night is pretty identical bar the choice of porn they watch. But the broadcast version includes a few extra jokes like when a hungover Peter claims it feels like he has accountants cranking adding machines in his head and we get a quick cutaway of the two inside Peter’s brain, and also new is a scene where Peter’s boss describes him as eye candy, and after being fired a devil pops up on Pete’s shoulder telling him not to inform Lois about his job loss but the angel doesn’t turn up as he’s stuck in traffic. As a result of this Peter then lies to Lois about not being fired, and everything after the talent competition cutaway is then new.

There are a few scenes that feature in the unaired pilot which weren’t used in the broadcast version and it’s easy to see why . For one thing Chris is even stupider than in the series and it doesn’t really work, there’s a weak joke where he pretends that the commandment “Thou shalt get drunk” is real, and after a gag where Peter mentions that he gave Chris his first beer (but claims that he turned out okay) Chris mumbles “I’m going to get wasted” and wanders off without anyone caring. Other slight differences include an unnamed character rather than Quagmire giving Peter a beer at the stag party, and there’s a different porn video shown, in this case we see a pizza delivery guy about to get laid with Peter saying “Oh he is going to get fired” rather than the Casablanca spoof, but other than that it’s very similar to the broadcast version and that is much better without such attempts at humour.

As a pilot it’s okay but it’s really not that funny. Meg and Brian’s characters are ill defined, though in the case of the former at least she isn’t the object of derision she later came to be so that’s a definite improvement, and Chris’s stupidity is so extreme it’s hard to believe he remembers to breathe, and I can’t imagine even Herbert being fond of that version of the character. If you’re a Family Guy fan you’ll probably find the Larry & Steve short somewhat interesting as it is quite funny in places, but The Life Of Larry and the unaired Family Guy pilot aren’t really worth watching unless you’ve watched every other piece of comedy ever created and are at a loss as what to do. And even then I’d suggest watching everything a second time rather than doing so.