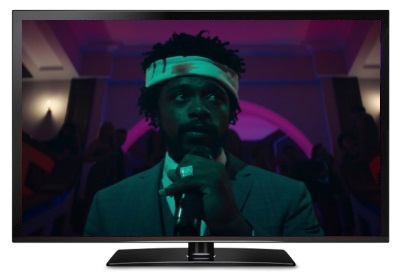 Sorry To Bother You was released in July 2018 in the US but already deserves a place in the Cult Classics column as I’ve no doubt it’ll be considered one as the years pass, and my only frustration is that it wasn’t a mainstream success. Indeed it wasn’t even originally given a cinema release in the UK and much of Europe, despite a fairly decent $15 million take in the US, which director Boots Riley said was because distributors feel “Black films don’t do well internationally”. Which is almost as bleak as some of the content within the film. At least it’s finally being released over here on December 7th so will hopefully gain a greater audience then.

An unusual sci-fi comedy set in an alternative universe that’s similar to ours but slightly off, Cassius “Cash” Green (Atlanta’s Lakeith Stanfield) lives in his uncle’s garage and is broke and so forced to get a job in a telemarketing call centre which is commission only, it’s a place which is shown to be without morality from the get go as Cash only gets the job after the manager calls him out on his employment history, but likes his audacity anyway. Cash can’t stop thinking about the big existential questions and wanting to leave an impact on the world, whilst his girlfriend Detroit (Tessa Thompson) is a struggling artist and he feels insecure due to that. Unsurprisingly his new job is soul destroying work and Cash isn’t coping well, until co-worker Danny Glover gives him the advice to “Use your white voice” (which when he does is provided by David Cross) and he’s soon a huge success. Riley mines a lot of humour out of the concept, even when it takes a bleaker turn when Cash is asked to use it all of the time.

Meanwhile Steven Yeun’s Squeeze is trying to get the company to pay them a basic wage rather than being on commission, suggesting the employees form a union, which leads to them striking. Whilst on board initially soon Cash is lured to the dark side, and loses not only friendships but Detroit too. Thompson’s character is pleasingly strong and she’s far better here than she is in Westworld, and also provides some commentary on the art scene as well, using her white voice when selling her work at a gallery and during a performance piece.

Throughout the early stages in the background we’re made aware of a company called Worry Free which provides accommodation, food and employment (though not pay) via adverts on tv, protests on the news and painfully horrible billboards, including one with a black male on it with the statement “Show the world that you are a responsible babydaddy”. Soon enough they become integral to the plot as Cash is promoted and learns that his new job involves selling their employees to various corporations, in what’s essentially slave labour. But of course it’s a deal with the devil, and he soon learns just how twisted Worry Free CEO Steve Lift (Armie Hammer, having a ball) truly is.

It’s a stylish, confident debut with some Michel Gondry-esque flights of imagination, like when Cash is on the phones to customers he imagines himself being transported in to their homes, including a man who instantly hangs up on him, a couple who are making love and a distraught woman who’s husband is in the hospital with stage 4 cancer. The way Riley shoots the manner in which Cash’s status and life style improves is also impressive, as is a cute claymation sequence. Whilst some of the satire is slightly on the nose – the most popular tv show in America is “I Got The Shit Kicked Out Of Me” which members of the public appear on to get beaten up, and the lift at Cash’s new workplace offers ego boosting pep talks, most of it is powerful stuff. There’s a lot of anger towards capitalism and the film is impressively pro union, with critique of how people have been crushed and failed by the political system that’s supposed to protect them, leading to a situation that Steve Yeun’s character describes as “You get shown a problem but have no idea how to control it, then you just decide to get used to the problem”.

It’s a film which pulls no punches and Steve Lift (clearly representing all monstrous corporation CEO’s) is shown to be a man without any consideration for any other living being, what with the way he treats his employees, let alone the rhino he machine gunned to death and proudly shows to all. And it also tackles many facets of America’s issues with race, from the fact that “White Voice” leads to success to Cash being subjected to racial stereotyping at one of Steve Lift’s parties, with the crowd baying for him to rap. When he does he’s painfully awful (as he’d warned them) until he simply repeats “N****** shit” over and over again and the mostly white attendees echo his words and go wild. It’s painful to see, and thankfully the beginning of Cash becoming fully aware of the nightmarish world he’s been drawn in to. Except unfortunately for him things are going to get far weirder than he could have possibly imagined.

Despite being considered genre fare it’s an important film with statements that I truly hope people will take on board. It’s also darkly funny, beautifully directed, with a fantastic script and some stand out performances, and is definitely something of a must see movie.

Related Links:
The film is now available to watch online here.
And gets released on DVD on October 23rd.