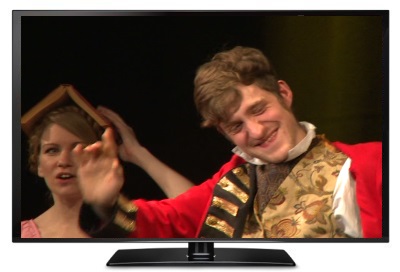 It’s not going to be a regular occurrence where I review live comedy dvds that have already been out for three years, if only because most will have decided whether or not they want to buy it by now. But Austentatious are still regularly performing so hopefully it’ll be of interest to some.

Featuring Joseph Morpurgo, Rachel Parris, Graham Dickson, Cariad Lloyd, Amy Cooke-Hodgson and Charlotte Gittins, for those not in the know Austentatious are an improv group who come up with a brand new Jane Austen novel at each and every performance. Joseph Morpurgo is pretty much my favourite comedian right now, his two recent shows, Soothing Sounds For Baby and Hammerhead were astonishing pieces of work, insanely inventive and painfully funny, with the former I don’t think I’ve ever laughed so much at a comedy gig and in the “The Greatest Live Comedy” feature it rates as my favourite ever gig. I’m also exceedingly fond of Rachel Parris who I’ve seen a good few times and who never fails to make me laugh hard. Oh, and that Jane Austen person, yeah, I’ve read some of her novels and they’re alright too. Might even stretch to pretty damn good in the scheme of things. So I had extremely high hopes when it came to watching the Austentatious DVD, released by the fantastic GoFasterStripe back in January 2015. But did it live up to expectations? Yes. Yes it did, and then some.

It starts off with a great introduction from a supposed Jane Austen scholar who lists a load of Jane Austen reality tv shows that she suggests exist, and who sets out the idea that Austen actually wrote 792 novels and that Austentatious are going to be performing one of them this very night, before reading through the audience title suggestions for the evening, describing a few of the supposed books, before settling on the suggestion for the evening, Innocence and Indolence. Set in 1814 during Diwali, the Hindu festival of lights, which apparently is the latest craze to sweep the country, there’s some cute exchanges amongst the cast about the meaning of indolence, and it soon becomes clear that the country is affected by an onset of laziness. As you’d expect from a Jane Austen story there’s a dash of complicated romance to proceedings as well, along with jealousy and damaged relationships and people wearing books on their heads. Well, okay, you might not expect the latter from Austen, but after seeing this show I think it’s a huge mistake she never featured such characters.

A lot of fun is had by the cast teasing each other (which includes great running jokes about pop up books and “anchestry”) but what impresses the most is how they devise the story as it goes along and also keep it impressively funny throughout. Morpurgo is unsurprisingly a delight, but all of the cast are on top form and their familiarity with Austen’s language and style is remarkably impressive. Highlights include Miss Bookhead (and the various other Bookheads) and formal conversations, jokes about Diwali and various other seasons, and so so many improvised lines. My particular favourites were “I learnt this trick in the army, if you walk away you’ll lose an arm”, “Thank you for letting me be a part of your flashback”, “Careful, it’s a pop up summons”, and “You know Fabrice from Zumba?”. Anyone who hasn’t seen it will be understandably confused, but I guarantee if you have they’ll bring more than a smile to your face.

It’s all immensely warm and likeable, those expecting anything particularly unusual will come away disappointed but then that’s not the idea really, this is taking the concept of Austen’s witty studies of England and playing around with them in a joyously silly fashion. Most importantly it’s very very funny stuff, with an impressive and involving plot created by the cast. Kudos should go to Chris Evans for filming the piece so well (and for his work with GoFasterStripe in general), and I’m truly grateful such a sublime piece of comedy exists for all to see instead of only by those in the audience that night.